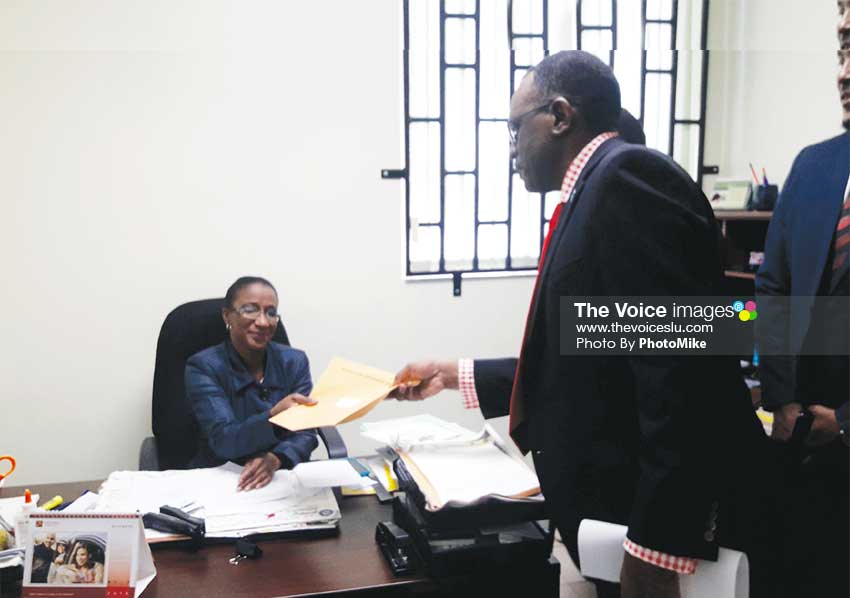 JUST over two months after announcing its intention to table a Motion of No Confidence in the administration of Prime Minister Allen Chastanet, the opposition Saint Lucia Labour Party (SLP) has finally taken the first steps in that direction.

The Opposition leader, who will be moving the motion when it gets to the House Floor, called on parliamentarians on the Government side of the House to “place country above self” and support the Vote of No Confidence in the leadership of the Prime Minister.

“In my capacity as Leader of the Parliamentary Opposition and Leader of the Saint Lucia Labour Party, I delivered this morning to the Clerk of Parliament for onward submission to the Speaker of the House, a copy of a Motion of No Confidence in the Prime Minister and Minister of Finance,” Pierre told reporters.

He claimed that the motion and the anticipated debate will articulate the deep concerns, anxieties and the feeling of hopelessness among large sections of the Saint Lucian society about the uncaring and irresponsible manner that the business of this country is currently being managed.

But, before the Motion finds itself on the House’s Order Paper, it must first be scrutinized by the parliamentary office to see whether it is properly worded and in line with the rules and regulations governing parliament.

Should everything be in order and on the button, it is expected that the Motion will come up for debate at the next sitting of the House.

Pierre said that since the appointment of Chastanet as prime minister the country has been governed in a manner that has undermined the Constitution, its conventions and practices.

“We have witnessed a growing abuse of public office, unreasonable and irrational decision-making, unsustainable fiscal deficits, squandering of the State’s financial resources, and a debilitating decline in the public trust and confidence in the prime minister’s ability to govern the country,” Pierre said.

He then gave examples by pointing to the time Sarah Flood-Beaubrun was appointed Deputy Speaker and her resignation which left the post vacant.

“This is no more than an abuse and contempt for the intentions of our Constitution and the People’s parliament,” Pierre said.

He added that the prime minister refuses to lay in parliament for debate, a statement on the use of the funds in the Saint Lucia National Economic Fund established under the Citizen by Investment Programme (CIP) despite pleas from the public and the Opposition.

“The prime minister, by his failure to do so has acted in breach of the Act, thereby contributing to growing suspicions about the lack of transparency and trust in the Citizen by Investment Programme,” Pierre said.

The odds of the motion being defeated in the House are almost 100 percent as government controls 11 of the 17 parliamentarians making up the House of Assembly.

The same feeling pertain today. As government ministers made their way into the House Tuesday some were asked to react to the motion while others were probed on which way they would vote. The unanimous response was one of incredulity that the opposition would believe anyone on the government side would be in support of the motion.

But Pierre is not perturbed. He wants each parliamentarian to vote according to his/her conscience.

“Many of them are privately stating their disappointment over the policies of Allen Chastanet,” Pierre said, however when asked how he knew and by what means he came by that particular piece of information he declined comment.

However he is adamant that the prime minister has recklessly and irresponsibly allowed the economy to descent into unsustainable deficits embarking on the path of hiving to fund those deficits by incurring more debt.

Pierre notes that the prime minister is presiding over a new culture of intimidation and vindictiveness in the governance of the country by vilifying, maligning an abusing ordinary citizens, professionals and organizations that have expressed concern about his actions and policies.

He said the massive attendances at public demonstrations, in particular the national public march last September that was organized by his party, along with the views of dissatisfaction displayed on placards and vocalized in mass chants, send a clear message that public confidence in Allen Chastanet has been severely eroded.

“Parliamentarians who are already deciding to vote against the motion before the debate takes place are setting themselves up as collaborators with Prime Minister Chastanet’s callous and uncaring policies. If at the end UWP parliamentarians decide to snub the people and support a prime minister who they do not hesitate to criticize in their own private circles then the people of the country will have an opportunity to witness self-preservation over the interest of the nation.

“The Opposition is calling on all House members, in particular, members on the government side, to place country above self and support the vote of no confidence in the leadership of Allen Chastanet and that he resigns immediately as Prime Minister of Saint Lucia,” Pierre said.