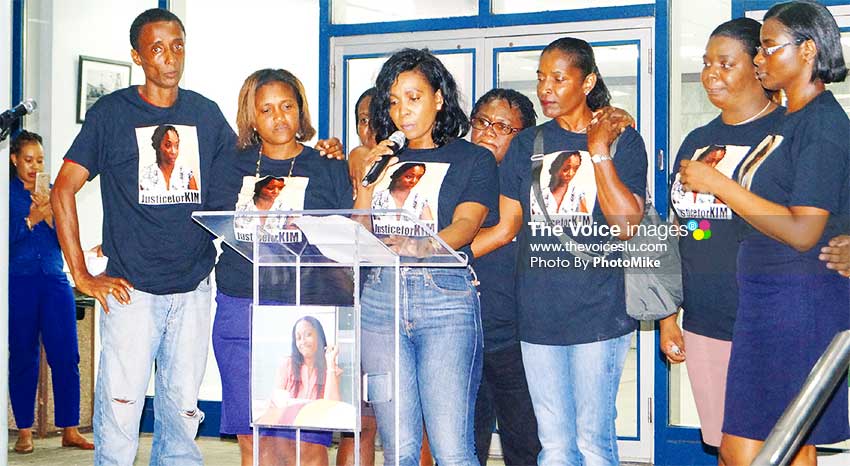 HUMAN Rights advocate Mary Francis strongly believes there should be – and has stopped just short of calling for — an independent investigation into the recent murder of Kimberly Williams de Leon.

Francis, who last weekend was awarded by a local trade union for her outstanding role as a human rights advocate, said she has her suspicions about the incident and declared that “wool is being pulled over the eyes” of the people of this country for too long.

“That is all I have to say… I have my suspicions and there is a lot of covering-up in Saint Lucia,” the outspoken Attorney at Law stated.

She told the local online news outlet, St Lucia Times, that she will not be surprised when the authorities get to the bottom of the recent killing.

“We have spoken on that before – that there should be an independent investigation whenever there is a police killing.

“I am not saying that the police are involved in that recent homicide, but there ought to be an independent probe,” she declared.

Saint Lucia police have disclosed that one of their own, the husband of the murdered woman, is a ‘person of interest’ in the case.

Francis recalled that the then Saint Lucia Labour Party (SLP) administration, in 2012, sought to amend the Police Complaints Unit legislation to facilitate a CARICOM Implementation Agency for Crime and Security (IMPACS) probe into reports of extra judicial killings by local police.

She said this was done to lend some independence to the probe into the 11 persons who were killed in 2011.

Francis observed that there was a lot of criticism of the legislation with persons asserting that it was unconstitutional.

“I don’t see how it could have been unconstitutional.

“Even presently, I am wondering if it is necessary to probably get some independent prosecutor to assist the DPP.

“It’s a small country. Maybe that is one of the difficulties he may be experiencing over the past few months in getting along with the prosecutions,” she stated.

Francis expressed the view that there was need for reform in that area, but she does not know how the reforms will be accomplished.

Ms Francis, who received a Lifetime Achievement Award from the National Workers Union (NWU) last Sunday for her advocacy for human rights here over several decades, is the latest of many local persons with interest in matters of human rights and justice to have spoken out this week on the killing.

The mother of Botham Jean – slain by a police officer in Texas, the head of a local women’s rights activists group, the president of the major opposition party’s women’s branch and the Minister for National Security have all spoken on the issue of Kimberly de Leon’s murder.

A vigil for Kimberly was also held on Tuesday evening on the Castries Waterfront.

Tuesday night’s vigil held outside the building Kimberly William de Leon worked in as a member of the accounting unit of the Ministry of Education, Gender Relations, Innovation and Sustainable Development.

The vigil, which was well attended by friends, family, colleagues and others who sympathized with the cause produced several speakers like those in the above photograph, including Education Minister Gale Rigobert, acting Permanent secretary in the Ministry of Education Michele Charles, mother of deceased Botham Jean, Alison Jean.

It was a night when the issue of domestic violence was given full attention alongside the need for Saint Lucians to be patient with the police as they go about investigating de Leon’s tragic shooting death at her home just over one week ago.

But while some Saint Lucians are going along with the call to allow police investigators time to conduct a comprehensive investigation into de Leon’s death, others are calling for an independent body to conduct investigations on account of de Leon’s husband, a police officer with rank, who was considered ‘a person of interest’.