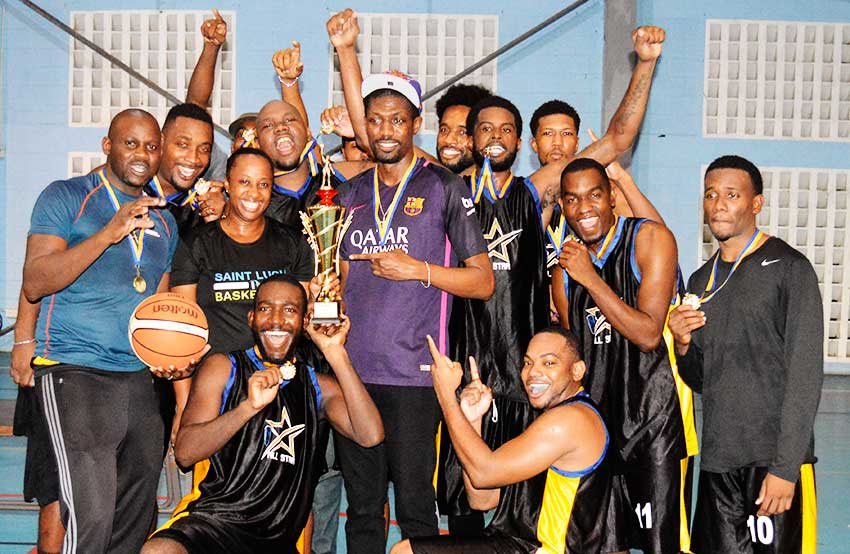 The curtains came down Sunday evening in the 2018 Commercial Basketball League and a new champ was crowned.

The Royal Saint Lucia Police Force (RSLPF) team entertained spectators by playing a 3×3 game before the grande finale between Peter and Company Distribution (PCD) and Financial Services as a result of the Saint Lucia Fire Service being unable to field a team for the third place showdown.

As a result the RSLPF team won their match by default thus becoming the third place team in the 2018 Commercial Basketball League.

Following the 3×3, it was time for the highlight of the evening, a rematch of last year’s finalists coming once again face to face to battle for the title of Champions.

In an exciting and riveting finals; Team PCD/GGSL, the defending champions for the last three years, started off with a 7 point lead at the end of the first quarter 18-11 against their opponents. By the end of the first half the financial services team had taken the lead with the score now 35-30.

Excitement continued throughout the next two quarters with both teams playing as hard as they could with spectators fueling the energy of their teams from the sideline. It was a point for point third quarter with both teams scoring 15. With only 10 minutes of play left the final hustle was on; though being outscored by one point in the 4th quarter PCD lost this time around by 4 and a new champ was crowned.

Notable players and Saint Lucia national team players from PCD/GGSL were the Louison brothers; Troy and Andre. Troy had 18 points, 14 rebounds and Andre 19 points and 10 rebounds.  Troy Louison for his exceptional performance in this year’s tournament was the 2018 Regular Season MVP and also gained two individual awards; Most Points and Most Rebounds.

For team Financial Services; notable players were Rahim Auguste, Sharmoir Jn. Baptiste, Joel Solomon and Marlon Noel all of whom have gone through the national programme, Rahim, Sharmoir and Joel are members of the National team.

Sharmoir Jn. Baptiste was the KFC Player of the Game for his 24 points, 5 rebounds. Rahim Auguste the MVP of the Finals/ Playoffs had 11 points, 4 rebounds, 6 steals and 5 assists.

Rahim received the MVP title for the finals/playoffs for his contribution to his team’s performance having an average 8 assists and 5 steals per night for the last three games. Rahim received Vouchers compliments KFC/ Real Foods Saint Lucia and a XL Prepaid plan Combo compliments Flow Saint Lucia in recognition of his efforts and hard work.

Rahim Auguste also received the Most Steals and Most Assists award in the 2018 Commercial Basketball League. Marlon Samuel and Joel Solomon had 10 points and 10 rebounds; 7 points and 7 rebounds respectively for Team Financial Services.

Coming from the RSLPF third place team was Shervon Matthew who was awarded the Most Blocks award in the 2018 Commercial Basketball League.