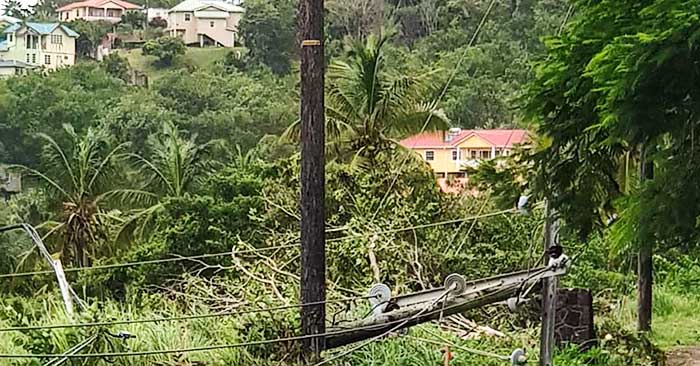 A YOUNG Castries lady wanted to send a strong and deliberate message to existing and potential rivals about just how unforgettable she could become in their private lives. Using very raw language, she recorded herself vaingloriously explaining the wide expanse of her voluptuous intentions, settling down to just two words — several times repeated in her viral posting — to sum-up her wide range of possible tempestuous interventions: Mauvais Temps!

These two French words describe in English everything from Bad Times to Stormy Weather – and the young lady’s colorful version of her virtuous message unleashed an entire theme that, by itself, evolved into a popular expression that took the local cultural stage (calypso and carnival included) by storm. And it still lives on…

Real Mauvais Temps is again taking the country by storm. One year after Hurricanes Maria and Irma visited death and destruction across the region, disaster warnings and preparedness activities are in high gear, like never before.

But even the best levels of readiness can and do sometimes result in unforeseen and undesired results that ought not to be overlooked.

Take the matter of if and when workers are to be given time off to tend to their homes and families ahead of approaching bad weather. It used to be that the Chamber of Commerce advised businesses in that regard. But after a few occasions when the predicted bad weather didn’t come to pass, employers fretted about costs of ‘paying time-off for nothing’. Today, the Chamber no longer advises.

Take too, the no less serious matter of what to do about the tens of thousands of students when real Bad Weather warnings are in effect and schools are to be vacated for use as emergency shelters.

Students must be sent home. However, the dilemma for many more parents than imagined is: What to do with their children sent home when they have to work.

The unintended result is that in too many cases, parents caught in the trap of being unable to have someone or somewhere to leave infants end-up taking them to work, employers therefore having to understandably accommodate that unexpected eventuality, with all its implications for productivity.

The number of related complaints by affected working parents every time students are sent home because of Mauvais Temps should be of more concern to the decision-makers.

It’s not good enough to say – as some do — that it’s not the State’s duty to relieve parents of the responsibility of caring for their children. That may sound true, but it’s also a fact that while every child has a wider family, a vast number of parents do not enjoy that should-be-normal luxury.

Solutions to such problems aren’t easy to find, but not impossible to innovate.

We can take the easy way out and insist that parents have the ultimate responsibility for their children’s welfare. But if so, what about the responsibilities of the State to all its children, as a signatory to the various international conventions on the Rights of the Child?

We should avoid being seen as a nation abandoning its affected children to Mauvais Temps.