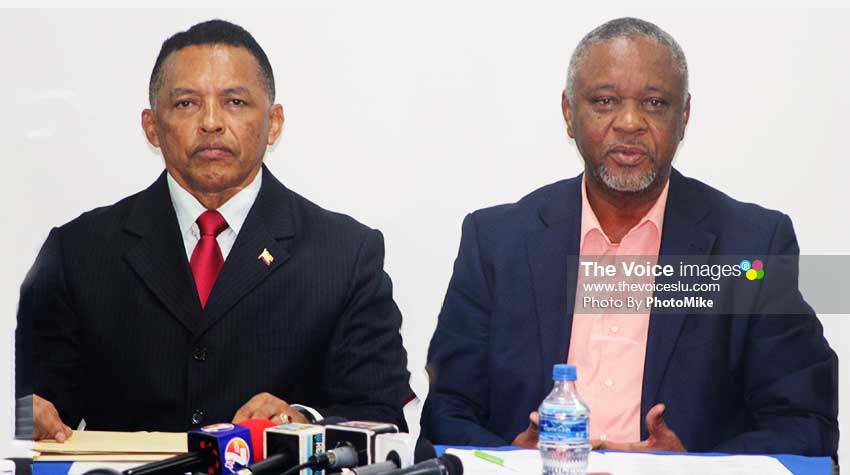 LOCAL security personnel and a high-level delegation from Venezuela that ended a one-day visit to Saint Lucia Thursday have agreed to working together to begin to end the Sai nt Lucia government’s apprehensions over the risk Venezuelans pose to the island’s security.

Government believes that the risk is real, given the migration of millions of nationals from Venezuela to other Latin American and Caribbean countries, including Saint Lucia.

Venezuelans are fleeing their country in large numbers almost every day, due to spiraling inflation and a rapidly declining economy, which has resulted in the lack of some basic articles for everyday survival.

Prime Minister Allen Chastanet says he believes that the economic situation in Venezuela has forced many of its nationals to leave the country in search of a better life. However, for them to leave with money to assist them elsewhere, they are using drugs and guns to acquire that much-needed cash.

Therefore, to limit the number of Venezuelans entering St. Lucia, Chastanet has imposed visas on them. But, he says, said the visa imposition was not political at all but rather security conscious in nature.

“My primary responsibility is the safety of Saint Lucians. I have no difficulties with the Government of Venezuela. This is not politically-motivated. This is strictly on a security basis,” Chastanet said.

The Prime Minister last week attempted to link more than half of the 60 homicides Saint Lucia recorded last year to guns coming out of Venezuela.

He claimed that Saint Lucia is a hot spot for illegal arms and drugs.

When challenged by reporters for information to support his allegation of a link between last year’s homicide count and guns emanating from Venezuelans, he responded: “Absolutely! The statistics are there to be seen”.

“You had 60 homicides, of which 40 were associated with drugs and to gang relations and one of the greatest sources of drugs coming to our country is Venezuela.

“We have seen several arrests of Venezuelans in Saint Lucia. We are continually seeing Venezuelans participating in illegal activities here,” Chastanet said.

It would seem that Chastanet’s statement may have led some to believe that the firearms used in homicides committed last year came from Venezuela.

But National Security Minister Hermangild Francis Thursday attempted to correct whatever wrong impression the prime minister’s linkage of last year’s murders to firearms from Venezuela may have formed.

According to Francis, before Venezuela could be blamed for allowing guns into Saint Lucia, a correlation must first be made in first finding the firearm that caused the death of someone and then linking that firearm to Venezuela.

“That (correlation) has never been done, but our information indicates that firearms come from Venezuela and other places in the Caribbean. So, it is not fair to say the prime minister actually said the homicides were due to firearms coming from Venezuela,” Francis said.

He further noted that a number of firearms have been taken from Venezuelans but there may be other guns coming into the country that the authorities may not know about.

Francis also said that local authorities have not been able to trace firearms to a particular country, hence the reason why Saint Lucia is asking Venezuela for assistance in tracking guns leaving Venezuela and ending-up in St. Lucia.

Meanwhile, Thursday was a packed day for the Venezuelan delegation headed by General Endes Palencia, the Vice Minister for Prevention and Security in Venezuela.

He told reporters his delegation’s visit was more of a fact-finding one, in which they would listen to the complaints Saint Lucia has and try to deal with them, such as putting together policies that would seek to strengthen the security of the two countries.

Minister Francis admitted that Thursday’s meeting with the Spanish-speaking delegation would be centered on the visa regime, drugs and firearms — and maybe a Memorandum of Understanding for cooperation between the two countries.