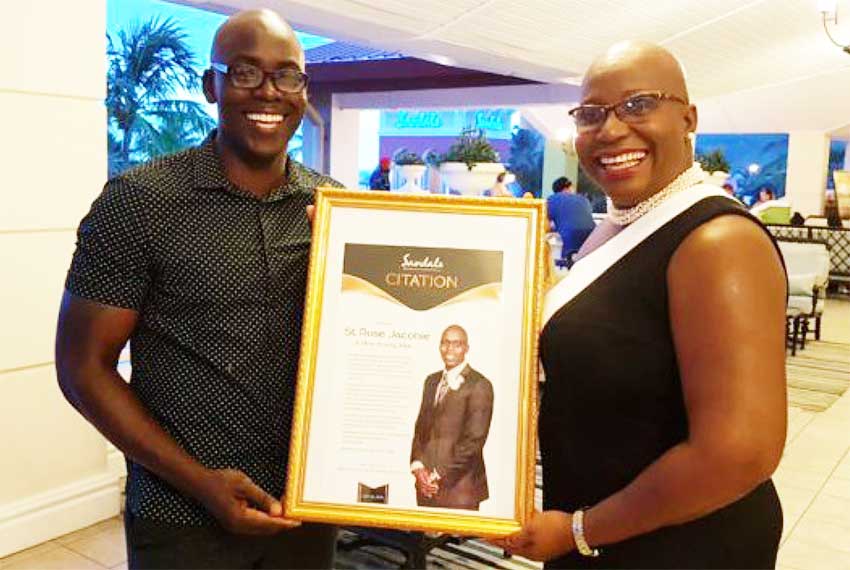 SANDALS Grande Saint Lucia Diver St. Rose Jacobie, who dove into open ocean off the coast of Saint Lucia to save two persons who had fallen off a party boat will be nominated for the Mountbatten Medal, an international award given by the Commonwealth Royal Life Saving Society for the most gallant rescue or rescue attempt.

The announcement came from John Bruce, President of the Life Savers Association of Saint Lucia, during a function held at the Sandals Grande Saint Lucia resort to honour St. Rose for his outstanding effort and bravery.

This is the second time in three years that a Sandals team member in Saint Lucia has been nominated for the award, which was won in 2015 by Zachaeus Dominique, a lifeguard from Sandals Regency La Toc Golf Resort and Spa, after he had rescued a member of the public who had gotten into difficulty while swimming in rough seas.

During a carnival party cruise recently two persons — a man and his companion who was from the UK — fell from the boat into the open water.

Without hesitating, St. Rose leapt into action and dove off the boat, just in time to grab on to the gentleman who had already started going under.

He was soon able to stabilize both persons and hold on to them until the boat turned around.

During Saturday’s function in his honour, he thanked his training for allowing him to respond so quickly.

St. Rose received an official citation from Sandals Deputy Chairman Adam Stewart CD, which was presented to him by Minister for Education, Innovation and Sustainable Development the Hon. Gale Rigobert.

The Minister praised St. Rose for his swift actions which she said surely saved lives that day.

Should his nomination for the Mountbatten Medal be successful, St. Rose will travel to Buckingham Palace to receive the award.