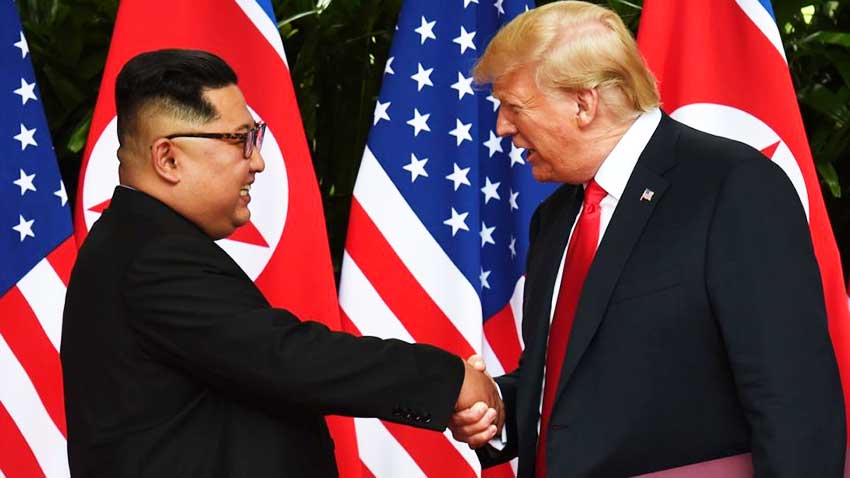 THE much anticipated, long-awaited, on-again off-again Singapore summit between US President Donald Trump and North Korean President Kim Jong-un has now come and gone and none but the US president has admitted that the world has been saved from a possible nuclear disaster of global proportions.

Last year ended with the two leaders sharing blistering attacks that left no one in doubt that the world was inching closer than ever to a nuclear showdown between North Korea and the USA. The DPRK had developed sufficient proven nuclear capability to show it could land missiles onto mainland US territory and the two leaders boasted about the proximity and size of their respective nuclear buttons. The adjectives use to describe each other did not lend either to any thoughts of prospects for peace.

But the DPRK Leader’s New year address, in which he surprisingly indicated his country’s willingness to participate jointly with South Korea in the Winter Olympics and Paralympics to be held across the border, opened the way to a quick succession of developments that concluded first in the third and fourth North-South Korea Summits in quick succession — and eventually the Kim-Trump Summit.

It’s easy to measure the success (or lack thereof) of the summit by way of asking ‘Who Won?’ or ‘Who Lost?’ But in this case both sides won and none has lost anything – at least not yet: The North Koreans have always riled against and opposed the lengthy annual War Games held by the US, South Korea and Japan in Korean Peninsula waters, land and air space. The US has always insisted that it will want to be satisfied that North Korea is ready to start on the road to complete denuclearization and it’s clear that President Trump is satisfied with President Kim’s undertakings. And just as well, the South Koreans have started what President Moon Jae-in says is an irreversible part towards a permanent end to hostilities and eventual reunification of the two Koreas after over six decades.

China is happy and even though Japan might still be reticent about US guarantees of military support in case of any attack eventualities, no country in the region can oppose the pacification of the Korean Peninsula.

The world is taking a much deserved sigh of relief as people and nations everywhere finally exhale.

As expected, the more hawkish of nations and conservative commentators are casting dark shadows and painting dark clouds about the US-DPRK concordat. But the countries most concerned and which would be most affected by a nuclear war are now relieved that the scares, threats and fears have been shelved and two nations that just months ago were on the brink of nuclear exchanges have now smoked the peace pipe.

President Trump now has nothing but praise for the ‘Little Rocket Man’. He has also (like President Obama did in relation to Iraq and Afghanistan) vowed to bring home the hundreds of thousands of US troops in the Korean Peninsula.

President Kim’s decision to blast a nuclear testing site drew some skepticism from the usual Doubting Thomases, but it was enough to encourage President Trump to reschedule the canceled summit and press ahead with the meeting.

The US President has said (to his 90 million Twitter followers) that he can qualify for a Nobel Peace Prize for meeting with his North Korean counterpart. If it happens, Trump and Kim will most likely share the prize, as did Israeli Prime Minister Menachem Begin and PLO Leader Yasser Arafat and later by South Africa’s Nelson Mandela and P.W. Botha.

But even before looking into the Nobel Prize crystal ball, Saint Lucia, the Caribbean and the rest of the world can rejoice that, at least for now, World War III has been put on hold. For how long? We will all see!