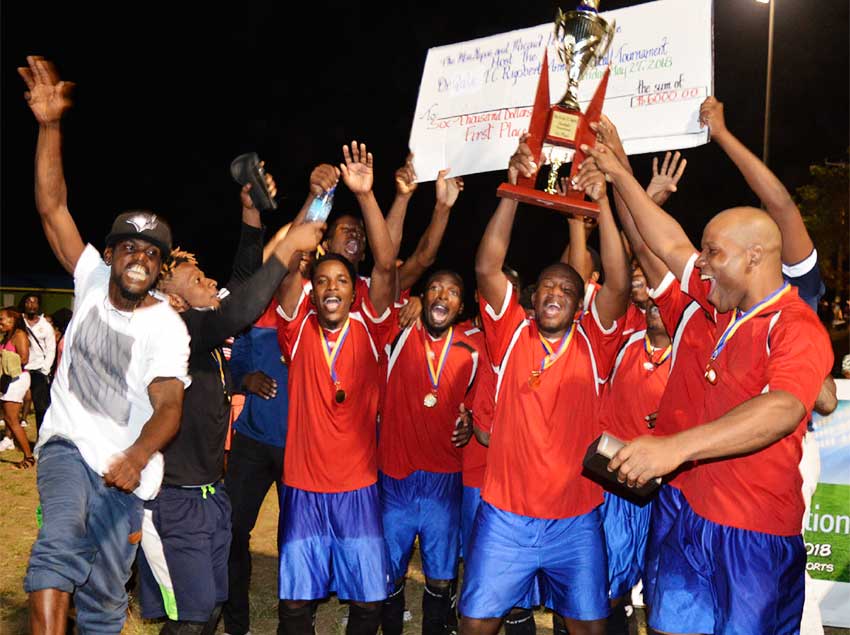 PATIENCE Youth Organisation (PYO) emerged champion of the inaugural Dr Gale Rigobert Football Tournament held at the weekend in Micoud before massive crowd of fans from near and far.

Under the theme “Fostering discipline through sports”, PYO nosed ahead in the 18th minute with a goal scored by LeewinHippolyte, while Leonard Casimir scored an own goal in the 38th to make it 2-0 in favour of PYO to end the half.

On the resumption, both teams upped the tempo just a notch, but Leeds — the aggressor of the two teams — applied relentless pressure on PYO in search for their opening goal, which finally came in the dying moments of the encounter — in the 86th minute — from the boots Levi Altidore from the penalty spot, just a little too late as PYO went on to win 2-1.

For the third place silverware, Uprising United got the better of Young Strikers Sports Club 1-0, a goal by Ridge Griffith in the 57th minute of play.

A total of 77 goals were scored from twenty-three games.

Meanwhile, Dr Rigobert who was present for the grand finale spoke to the VOICE, during the second half of play about the competition named in her honour and the plans she has for sporting development and the rehabilitation of playing fields and the renovation and resurfacing of the playing courts in Micoud North, this is what she had to say:

In terms of the playing surface she said, “I did indicate at the opening ceremony this is the last time the young people of Micoud North will be playing on this pitch.

“When I first met with them as a young candidate in 2011, they did ask for a rehabilitated playing field — and they deserve that and more, given their sportsmanship, talent and their level of interest that the community has on a whole in sports.”

She added, “Project cycles can be long, but I have reasons to believe that the Minister of Finance, Prime Minister Allen Chastanet, will in time make the resources available. Plans are in advance stage; we have had several meetings with the consultants Bruce and Dawn Lockerbie.

“We have shared with them some of the visions of the sports personalities in the community in respect to what they would like to see of their football field.”

VOICE: Apart from football and netball what other sports you looking at for Micoud North?

Dr.Rigobert: “I would not want to go through the fine details of the plans we have for rehabilitation for this area, but I would like to see swimming included, we do not have a pool of professional dimensions on the east coast. I am aware in the south some people open their homes so the school children can train. I would also like to see tennis as well.”

VOICE: Micoud North over the years has produce a number of national cricketers the Serieux, Charlery and Charles brothers and including Marshall Francis, will one see the sport of cricket returning in a big way on the Micoud landscape in the not to distance future?

Dr Rigobert: “I am happy the Micoud /Mon Repos Credit Union have taken the bold initiative to reenergize the cricket tradition in the community. Over the years the district has produce quite a few national players including Marshall Francis who I think in his time set the tone for other cricketers to follow. I am very encouraged that cricket is picking up again and this is why I pumped a significant amount of resources to rehabilitate the Wenn road leading to the Wenn playing field because it is presently the cricket hub in Mon Repos.”

VOICE: Interesting you mention the Wenn playing field, will one see sometime soon that lighting get erected at that facility?

Dr.Rigobert: “I really want to thank the sports councils in Micoud North, we met in 2011 -2012 and we recognised that we could not rehabilitate all the fields in the same extent. We agreed, we will maintain Wenn as a proper cricket playing facility and Micoud playing field we will develop for the other sports. That is the kind of agreement that we have internal for Micoud North, evidentially we need to do some more work. I don’t know as to the extent the rehabilitation will undertake at the Wenn playing field, but within this fiscal year Micoud North is on the card.”

VOICE: You have the Mon Repos and Micoud Youth and Sports Council in place, how closely as Parliamentary Representative do you work with them?

Dr Rigobert: “I have work with them very closely, we have partnered with them in several initiatives. The Micoud Youth and Sports has an interim executive. There was a walk that was organised recently but unfortunately it was postponed. The Mon Repos and Micoud football league collaborated along with me to stage the football tournament. The Micoud Youth and Sports Council in the past have played a significant role in the netball tournaments. The planning of this tournament involved a representative of both councils, the presidents and managers of the leagues, we have a good team”.

VOICE: Do you want to clear the air as to the funding for this tournament?

Dr.Rigobert: I did indicate, my office in the past along with the agencies in Micoud North have administer those competitions and there was some kind of impropriety which is regrettable and I think all parties have learn out of that experience, that is really regrettable. I know when the private sector makes a contribution to the development of youth of this country, it is expected that money will go to the youth.”