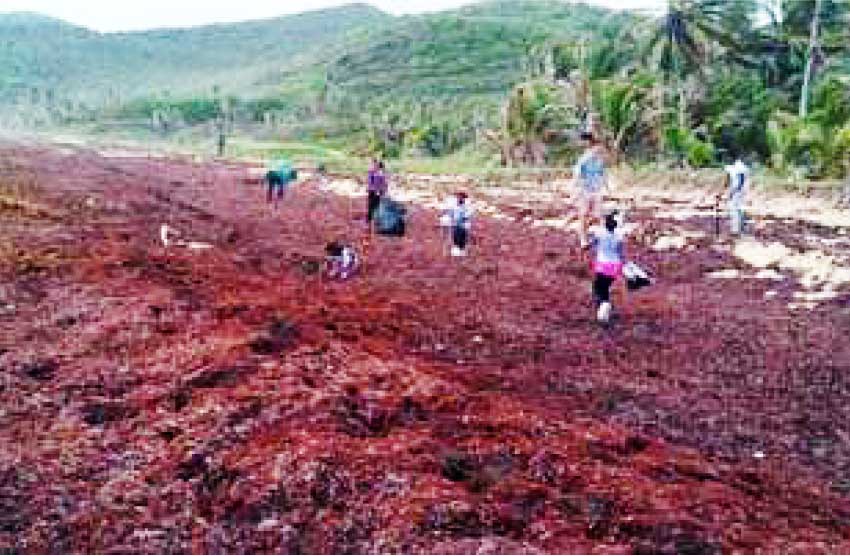 PRESS RELEASE – LEATHERBACK Turtles are the largest marine turtles and can weigh in around 500kg, dive up to 1200ft and cross both the Pacific and Atlantic Oceans. As if Leatherback Turtles didn’t have enough to worry about, with their relatively small brains that have been around for at least one hundred million years (1); that’s 667 times longer than us, how about nesting in St. Lucia. Now, at least in Grande Anse Beach in St. Lucia, they had to worry about all the plastics they have to face in the sea (2), how to cross the barrier of a thick bed of stinking Sargassumflutians on their birth beach, and how to climb up mini sand cliff (a two foot high beach step that was created by weed sand erosion), in order to get to a dry nest site. But don’t worry, their small brain doesn’t mean they can’t figure things out to survive, they’ve been around a long time and have likely faced many of life’s obstacles during their long evolutionary history.

Unfortunately, Leatherback Turtles are an endangered species. One of the factors that contribute to this demise is that they often mistake plastic bags floating around in the sea for their favourite food Jelly Fish (3). After all these millions of years it’s a lesson to us about the problems we are causing with our love for, and carelessness with, plastic.

Trevon Naitram, a 10 year old from St. Lucia, was motivated to think about the plastic issues when he heard from the Saint Lucia National Trust (SLNT) about how plastics in the sea were causing the endangered turtles so many problems. Then he witnessed the masses of plastic waste that were polluting the Grande Anse Beach. So he recruited Dr. Gannon (Dean of International American University College of Medicine in St. Lucia), who had just been talking to him about becoming a doctor one day, to help him do something about it. Dr. Gannon asked Melissa Mc Lauren from the SLNT if she had any bags they could use and she said “What a great idea, we had done that a few weeks ago!” and found us a pile of big plastic bags. Trevon and his assistant Dr. Gannon got to work and started cleaning up the plastic mess. Before you knew it, the other children saw what was going on and asked Trevon, who explained that we were cleaning up the mess of plastic that others had left behind and had floated up on the beach and that we were helping the turtles too. Like magic, those children went to get their parents and they all got to work too and had some fun. It turned out to be like the good old story of children leading the way to the future. If Trevon and his junior colleagues can understand what plastic is doing to St. Lucia and the turtles and do something about it, maybe this can translate generationally to helping our good old planet Earth survive the plastic problem. 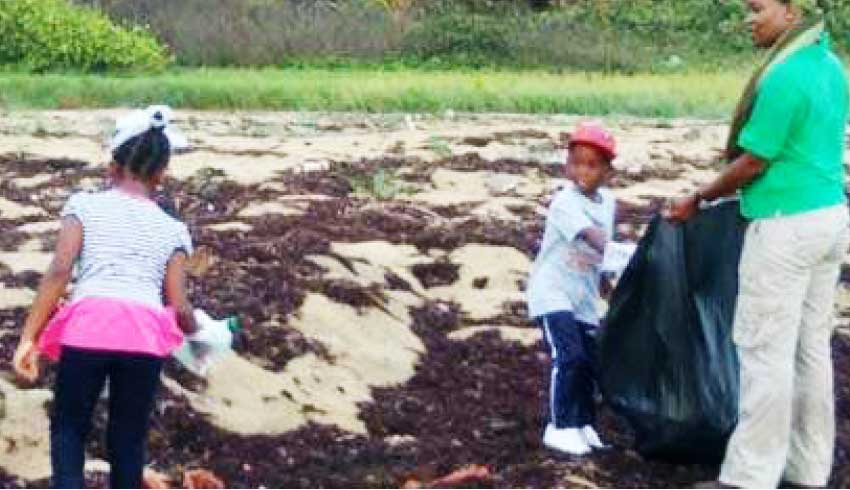 Now to the story of the SLNT’s Turtle Watch Camp held from May 26th-27th (3 days after World Turtle Day), which, after all, was why we were at the Grande Anse Beach. Around midnight by moonlight, adults recruited into teams by the organisers patrolled the Sargassum-laden beach, looking for turtles. It’s a very long beach and all I can say is, that if you’ve never walked a long way on a thick Sargassum bed, don’t do it unless you’re in really good shape; it’s really, really, hard work especially by moonlight where your footfall is not clear in that black mush. Be that as it may, we did make many long hard patrols until 3:00a.m. (we were worn out) when we decided to visit our tents and collapsed into sleep. The organisers kept it going with the words “be ready to be waken if we find turtles”, to which we politely nodded our sleepy heads. Nobody saw any turtles that night but when they woke up next morning to see the sunrise over the Atlantic Ocean, the guides told us a Leatherback Turtle had appeared and laid her eggs without being noticed by them in the receding moonlight and camouflaged by the dark Sargassum. We all trekked over there and saw the evidence. The good lady had got over the weed and flipper swipe prints showed she had climbed up the mini sand cliff and laid her eggs in the dry sand under a tree way up the beach. We all wished we could have seen her but were very happy that she had succeeded and wished best of good luck to her soon-to-be hatchlings. Finally, we may not have seen turtles but we all learned a big lesson about pollution from children. (SLNT)