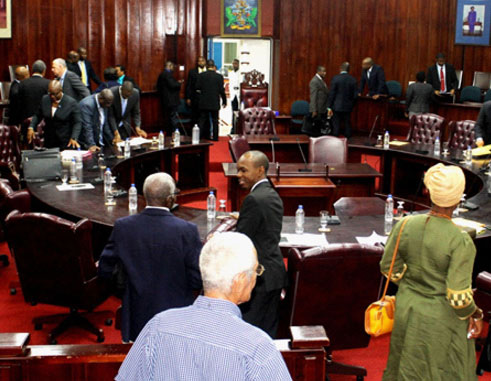 I get disappointed with every budget debate, simply because it is not a debate — especially now that we have become so tribal in our politics.

The days of great statesmen are gone. We have a number of little boys in the house having senseless arguments. They continue to blame one another for the problems of the country, as well they should, but the House of Assembly should be about prescribing solutions, not casting blame.

It is time to elevate the discussions, but I can assure all that this will never happen under our present system. The main concern of our parliamentarians right now is to ensure that ‘the party’ looks good, so all the members on the governing side will stand in support of the budget and all on the opposition will stand to vilify it.

The debate (if we can call it that), is not balanced and objective. The members of parliament take an oath when they come into office to defend the right of the people they represent, but the main focus is protecting ‘the party’. That is the order of the day and I do not think that any of my readers will dare argue that. We like it so!

Again, I present the Independent Model, in which all parliamentarians sit as equals around the horse shoe, with no allegiance to any party and the kind of debate that we need for the development of this country can happen. The loyalties of members of parliament are to the people they represent, not to ‘de party’.

The present system is a rubber stamp. Do you remember in our history of parliament a budget not being passed? The government has the majority in both the Lower and the Upper Houses.

While Mr Bousquet had his axe to grind, it represented the kind of debate that can happen under the Independent Model. Sometime later, when the wounds were healed with the party, he went back to the same order of business.

The other presentation that I respected even more was when George Odlum referred to a budget presented by his party as ‘a bikini budget’. The respect is not in the name given, but the fact that he was able to give an honest opinion even when he was aligned with the party. (Of course, we know that he was not liked in the party thereafter. When you are honest you are not liked…)

So, I look to the day when our people would have evolved their thinking and do what is best for the country.

As I have told many people before, the Independent Model is not cast in stone and so I am happy when people read my articles with a critical eye and objectively dissent with my views.

Looking forward to the discussion.