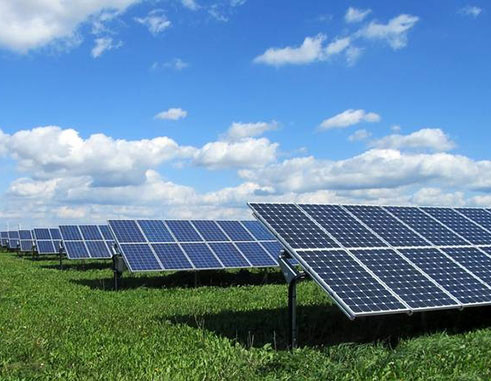 Energy from the nearly 15 thousand solar panels that comprise the island’s first utility-scale solar farm began feeding the grid on April 9 and the entire 3 megawatts was online on April 11.

Project Director, LUCELEC’s Acting Planning Manager, Cornelius Edmund, is pleased that the energising tests have gone well and the solar farm is producing its maximum output.

Edmund explained, “The project is about 90% complete. All the panels and associated electrical works have been installed and tested.

“The contractor is currently putting the finishing touches such as communication and security equipment, completing the fencing, drainage and service-road works and site clean-up.

“We want to ensure that everything is working as it should before the project is commissioned and handed over to LUCELEC.”

All of this should be completed by mid-June.

The main contractor for the solar farm is GRUPOTEC, an international firm with extensive experience in developing solar plants worldwide.

But in the design of the project and the contract, LUCELEC ensured there were provisions for local labour resulting in three sets of local contractors and 40 to 45 people hired for transfer of knowledge and technology.

Construction of the 20-million-dollar renewable energy project funded by LUCELEC started in November 2017. The panels are spread across three sites distributed over a total of 15 acres of land, just north of the Hewanorra International Airport.

The 3 megawatt solar farm will generate 7 million kilowatt-hours (or units) of electricity per year, which is about 1.3% of the electricity generated from LUCELEC’s Cul De Sac Power Plant.

It will reduce the annual volume of fuel purchased by LUCELEC by about 300 thousand gallons. LUCELEC uses approximately 19 million gallons of fuel per year.