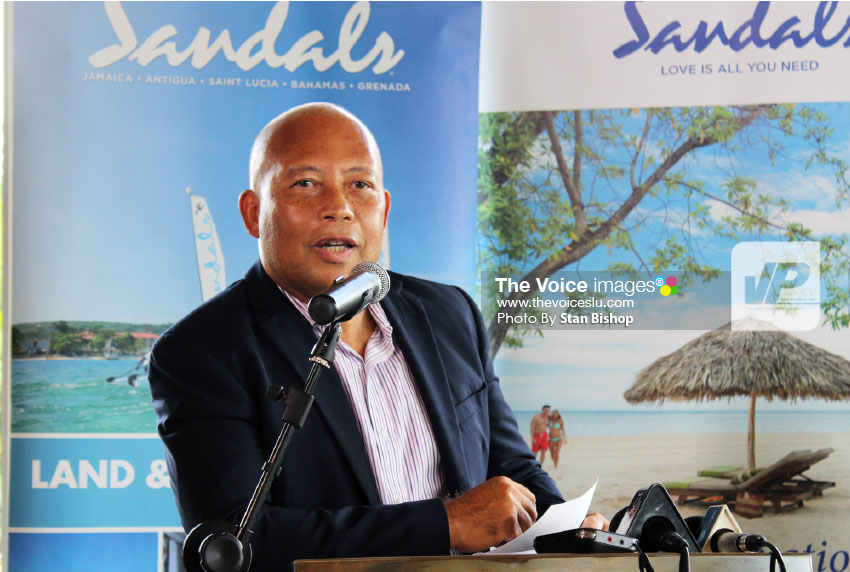 MANAGING Director of Sandals Saint Lucia Resorts, Winston Anderson, says that based especially on feedback from returning guests, Saint Lucia’s tourism product is in good hands. Anderson said that while beautiful beaches and hotels can be found anywhere else in the world, one distinguishing factor keeps coming back to Saint Lucia is its people.

So confident is the Sandals chain in Saint Lucia, Anderson said, that Sandals is investing in its soon-to-be-built 380-room hotel next to its Sandals Grande property at Pigeon Island. He said Sandals will continue to play a major role in helping to develop the island’s tourism product. However, he lamented some outstanding issues that need to be curtailed if the industry is to realize any serious improvement.

“Naturally, safety is an important issue and the cleanliness of the island as well. I think it’s important that every single one of us understands that visitors want a clean environment. Sometimes, it’s a little bit disheartening, quite frankly, when you walk around and see people throw things on the road. It’s something we have to focus on to make sure that we have a clean and safe environment,” he explained.

This year, Sandals will celebrate its silver milestone since coming to Saint Lucia in 1993. On Sandals approaching 25 years in Saint Lucia, Anderson said: “Twenty-five years run on very quickly. I mean, I can look back and remember in 1993 when we came in for the construction (phase) and then opening in 1994. A lot has happened in Saint Lucia since.”

Anderson, who has been with the company for many years and rose through the various ranks, said Sandals is proud to have been here for 25 years, and prouder to have become a citizen of Saint Lucia in every sense. Since opening Sandals La Toc nearly a quarter century ago, which started journey here, the hotel chain has since added three more properties, namely Sandals Halcyon in 1995, Sandals Grande in 1992 and Sandals Golf & Country Club last year. He said that apart from expanding, Sandals has also deepened its ties at the community level.

“We’ve been able to work very closely with the farmers, fishermen, taxi drivers, business sector, and we really feel that we have contributed positively to the economy of Saint Lucia,” Anderson said. “As far as the training and development of the people, today we employ 1,800 people directly amongst the three hotels. We also have the calls centres.

“Our three general managers at the resorts are Saint Lucians. Ninety-eight percent of our staff members are Saint Lucians. We continue to develop and invest in the people. So I think the greatest contribution is really how we have truly invested in the training and development of our human resources.”

This year promises to be an even more exciting year for Sandals, as it is about to embark on the construction phase of Sandals La Source in April, fittingly the month it began operations here 25 years ago.

“We just opened Sandals Royal Barbados. I was there (earlier this month) for the opening and it was phenomenal. Sandals La Source promises to be better.”

“As part of our 25th anniversary, you’re going to see a lot more involvement, input and integration in the communities around Saint Lucia.”

Last year, Sandals was at the centre of a war of words with the Antiguan government which accused the hotel chain of not paying its fair share of taxes to the State. This led to that country’s Prime Minister Gaston Browne also accusing the chain of shutting down its Antiguan property, which Browne said was in direct response to the government’s criticism over the tax issue. However, Sandals responded by saying that it had closed the property to undertake rehabilitation works.

When asked for an update on the relationship between Sandals and the Antiguan government, Anderson said: “We just reopened the hotel there after spending a lot of money improving it. The hotel looks fresh and good. Antigua was the first island we went to, so we love Antigua and Antiguans and are committed to working with Antigua and Antiguans. I’m sure I can speak for our Chairman and CEO and they love Antigua and the gorgeous properties. So we’re going to continue doing what we do best and that is looking after the people continuing to invest in and develop the product in Antigua. That’s really where we’re at and where our focus is.”

“Absolutely.Without a doubt. I think Castries, Gros Islet, Anse la Raye and Soufriere – all these communities are certainly strong tourism products that we need to develop and make better,” he said. “Tourism is everybody’s business…Guests will come if the service is right and if the experience is great. I think it requires every single one of us to do that.”