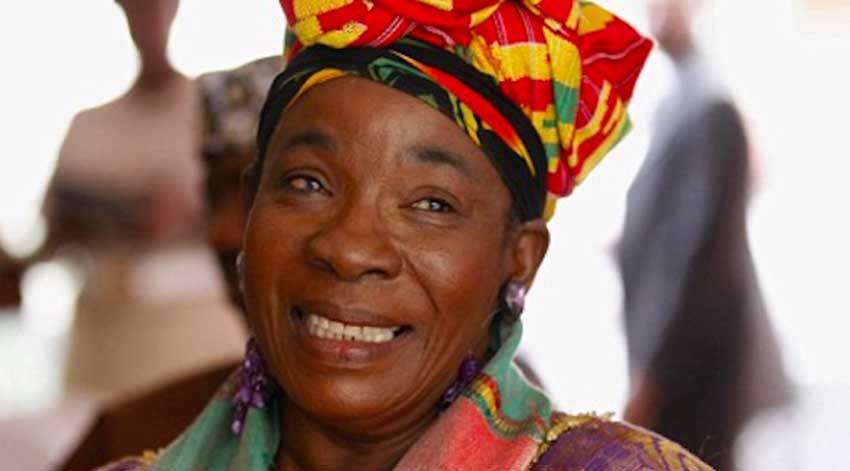 NOT everyone can speak joyously about their job as a source which rejuvenates them and creates excitement in their lives. Also, not everyone takes delight in empowering the youth, vulnerable women and the elderly.

It so happens that there is a St. Lucian who is doing just that. She is assured, educated, talented and bubbles with elation at simply doing her job of empowering the youth, elderly and defenseless women.

Meet Rosemary Duncan, a product of the Gros Islet community and Corinth Secondary School, who worked her way through academia to secure a BSc Degree (Hon) in Business Administration and now manages the Rita Marley Foundation.

A brief history of the foundation will give an idea of Duncan’s disposition and a sense of why that line of work, which she says she loves, seems to be her calling in life.

Marley, wife of deceased reggae icon, Bob Marley, founded the foundation in Ghana, West Africa and in Jamaica. The foundation is geared towards the alleviation of poverty for peoples of developing and less developed countries.

An online description of the foundation says that its long-term function is to eradicate poverty and hunger in specific selected communities, using as its tools, empowerment of those communities through the creation of economic investments, improvement of educational opportunities and the development of knowledge and proper practice in nutrition and health care.

The foundation also sees about scholarships/fellowships for youth and other qualified individuals to attend academic and/or trade institutions and continuing education activities in the Caribbean, Africa, and USA or throughout the diaspora.

The foundation is also engaged in refurbishing/rebuilding libraries and health care facilities. It will organize programmes, concerts, tours, exhibitions and other forms of artistic activities to disseminate the message of peace, justice, equality and human rights.

Its online profile also says that it supports indigent musicians through various services, including, access to health care, emergency grants, educational improvement and instrument replacement. The foundation will also offer support mainly through community, religious and faith-based and/or private organizations.

Duncan’s joy at rolling up her sleeves and engaging impoverished youths and defenseless women and girls in activities that show them that they too have what it takes to become whatever they want to be can be heard in her voice, and seen on her face whenever she speaks about her job.

“In Jamaica, we do a lot of work with the youth, vulnerable women and the elderly. For instance, we have an annual public speaking competition among high-schoolers, the aim of which is to develop confidence in them in representing their country on any platform or forum,” she said.

“We also have essay competitions, skills development training and workshops for the youth. We give scholarships so they could further their studies at universities.

“In Ghana, we have adopted the KonKonuru Basic School, which has about 300 students. We provided its infrastructure, books and resources. We also work with the (rural) community comprising about 3000 people.”

To emphasise the foundation’s work in the community, Duncan spoke of a community with 10 percent of its residents having pipe-borne water at one time, excluding the school, and students having to walk long distances to carry water to the school to take care of simple chores such as flushing the toilets. The foundation, in collaboration with Water for Humanity, stepped in to bring clean, safe water to the community, ending the risk girls were exposed to along the way while fetching water for the school.

“We also built a health care centre for the elderly in Konkonuru. The villagers now have pipe-borne water in specific places and we constructed a home for the aged called Alpha and Omega,” Duncan said.

The foundation, which was established in 2000, has also adopted about 35 orphans from Axum, Ethiopia, and trains youth in organic farming, among other things.

But how did Duncan move from a teenage girl who loves dancing at Corinth Secondary to head a highly-respected non-governmental organization like the Rita Marley Foundation?

In her own words: “I was the first Miss Corinth High School, which was my first experience in pageantry. I was also involved in dance. I studied for a BSc at Eastern Connecticut State University. I graduated with Honours. I won the first national WobDwiyet competition in St. Lucia in 1992. I also participated in the Carnival Queen Pageant.

“I have always been interested in humanitarian work, philanthropy and entertainment. I wanted a job with which I can do what I love. I applied for the position at the foundation as everyone else. I was interviewed and got the job in 2006. I love it.”

She added: “The job has impacted me tremendously. I have always been someone who care about people but even more so now because I really work with persons who are in need. Working with the youth and women who have gone through unspeakable stuff has really broadened me and impacted me positively and made me more humane.”

In September last year, Duncan accepted, on behalf of Rita Marley, an Honorary Doctoral Degree bestowed on Marley by the University of Fort Hare, South Africa for impactful contributions through music and for Marley Foundation’s philanthropic works in Africa and Jamaica. Duncan not only received the award for Marley but delivered the keynote address on Marley’s behalf.

This was Marley’s second award of this magnitude. In 2015, the University of the West Indies, Mona Campus, Jamaica, awarded her an Honorary Doctor of Letters Degree for notable work in preserving and advancing Jamaica’s music and culture.

Duncan is presently on a visit to Saint Lucia enjoying as much as she can, a common trait among many St. Lucians who live and work abroad whenever they get time off to visit their families.