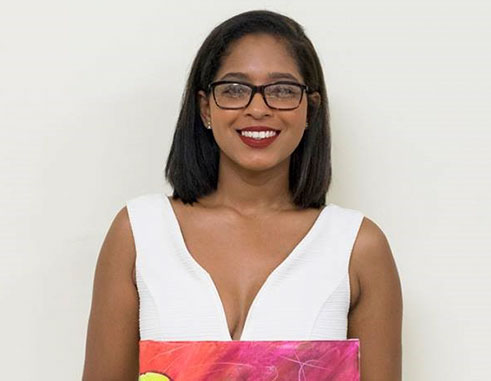 THIS UWI Graduate is not only determined to further herself but devotes most of her time to the uplifting of young girls.

Following in the paths of exemplary women like Malala Yousafzai and Michelle Obama, Chelsea Foster founded Girls of a Feather, a mentorship organization for adolescent girls in St. Lucia, in 2011. Foster always had a passion for empowering and supporting those around her who were being exploited in one way or another.

She describes herself as driven and passionate and is continuously inspired by other women in the field. Foster also laments that as a child she had been encouraged by her mother to play a part in giving back to society. As Foster did not find any group sharing her passion, she was moved to start her own.

She created the organization with the vision to cultivate activism fuelled and powered by women and girls, to assist in the personal, professional and academic development of their mentees. For Foster, this has proven to be a very fulfilling journey, being able to witness the growth of Girls of a Feather, and how it has positively impacted young lives. Indeed, it is serving its purpose.

Foster highlights the numerous successful programmes, workshops and fundraisers over the years where she says support from the public was amazing. With the help of volunteers who share in her passion, Foster and Girls of a Feather continue to be the change they would like to see in the world.

Let’s get to the Real Rundown with Chelsea Foster.

RRD: What moved you to start your organization?

Foster: Girls of a Feather started off as a passion project when I left Sir Arthur Lewis Community College in 2011. There were two things I knew for sure; that I wanted this to reach adolescent girls — to empower, motivate, and support those affected by different social injustices; and I wanted to ensure it was powered and led by women my age. I was unsure as to what direction I wanted to go, how far I wanted to take it and even what exactly I wanted to do. But the idea persisted, so I started off small. I eventually created a Facebook page and two years later, we’ve had successful Twitter Chats, our annual Beauty with Brains Camps, a school club, and as of this year,our flagship Girls with Goals mentorship programme. I felt like I had to be part of the conversation in trying to make some sort of change.

RRD: How do you find people to bring in that truly care about the organization the way you do?

Foster: It’s a combination of networking, reaching out to people I knew could be assets to the team, and inviting volunteers who were passionate about working with girls and willing to learn how to become better advocates. I will forever be thankful for persons like Christy Butcher, Velika Lawrence, Bennet Charles and Jessica St. Rose, who have encouraged, pushed and supported me along the way and, of course, our peer leaders over the years. It has been tough, however, as my vision for the organisation grew and I had to deal with trying to explain the purpose of the group to newcomers. Over the years, we’ve seen a few persons come and go through the organization, but continue to support from a distance.

RRD: What motivates you?

Foster: At one point, I was having doubts about what I was trying to achieve with the organisation. I felt like I had not made any significant difference from when I started 4 years ago and that we were not making much of an impact. I was so worried about all the expectations that were not met, that I forgot who our main priority were and that were the girls who genuinely enjoyed being in our company and making time to participate and help keep the group going. So I would definitely say our “Feathers” keep me motivated.

RRD: How do you generate new ideas?

Foster: Definitely collaboration and research, whether it’s from team members, strangers, or being inspired by different feminist bloggers and youth organizations around the world, especially in the Caribbean. I try to emulate similar strategies they have used to tackle different issues. We recently launched a web series called It’s A Girl Thing, in collaboration with a local YouTuber — Chadel Mathurin — to put together a series of videos which will give girls the opportunity to experiment with something more scripted and educational that could reach a larger audience online.

Another idea of mine came from the Girls of a Feather Club at the St. Joseph’s Convent when I realized it needed some more direction. This led to me doing my research proposal, at the 12th Caribbean Institute in Gender and Development’s (CIGAD) training programme, on using more gender approaches in secondary schools to encourage more youth to learn about feminism, gender dynamics and gender issues.

RRD: What is your greatest fear, and how do you manage fear?

Foster: If you had asked me this a few months ago, I would probably say failing. But I can’t tell you how many videos I’ve watched and articles I’ve read that have completely changed my perspective on learning from your biggest disappointments in life. I cry when I need to, journal, vent to my sisters, pray, listen to podcasts or read books on topics that are parallel with whatever is bothering me at the time. Now for someone older than me, they might find my newest fear funny, but aging and “adulting” is beginning to way heavy on me!

RRD: Who has been your greatest inspiration?

Foster: No one, in particular. Of course, my bias will always be women, because we have to be so resilient in a world and society that favours men.

RRD: What do you do in your non-work time?

Foster: I always tell people Girls of a Feather feels like a full-time job (it’s not) but besides that I do have a guilty pleasure. I’m a reality TV junkie and I love catching up on a new drama/comedy television series. So anything by Shonda Rhymes, Issa Rae or Ava Duvernay is my thing. I also love experimenting with new recipes in the kitchen so I bake quite often at home.

RRD: What memorable responses have you had to your work?

Foster: Maybe not a response, but the most memorable experience thus far had been being granted a scholarship last summer to attend CIGAD in Barbados. I had the opportunity to share my work with and meet some brilliant activists, scholars and feminists in the Caribbean.

Foster: Probably to “just believe in yourself”. I’ve been told this on numerous occasions, most recently by my 6-year-old nephew during the holidays when I told him that I don’t think I’m fast enough to beat him in the race he wants me to run with him. I mean, he gives some pretty sound advice when you need it.

Such passion from a brilliant mind. She is truly a role model for the young women who are following. We applaud Chelsea for her courage in starting this movement and to her we say “Here’s to strong women. May we know them, may we be them, may we raise them.”