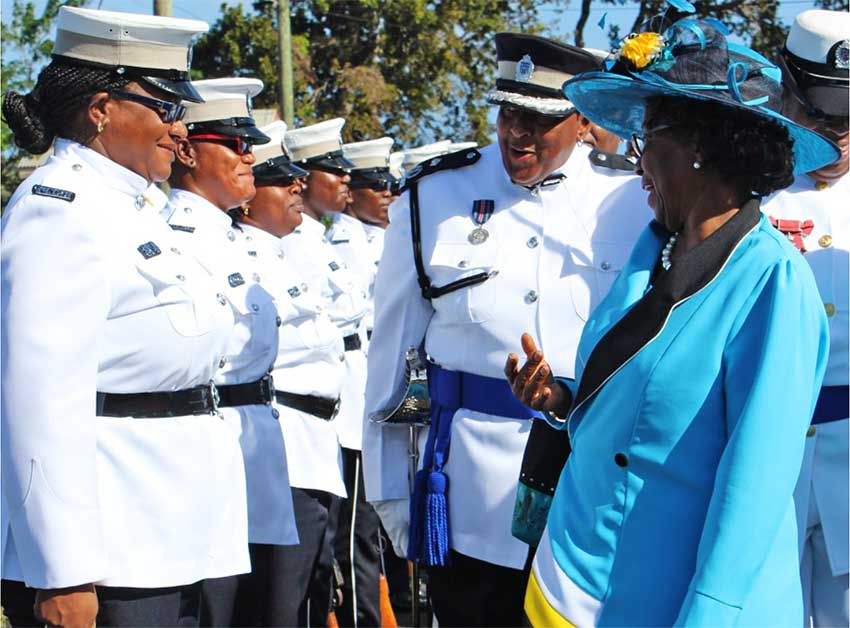 THE Royal St. Lucia Police Force on Thursday gave outgoing Governor General, Dame Pearlette Louisy, something to remember them by – a parade in which officers collectively said thank-you to her for meritorious service over the past 20 years.

Dame Pearlette, who recently bid the nation farewell in a televised address, will demit office tomorrow with an approval rating that many St. Lucians seem to have deemed sky-high.

The parade was held on Thursday at the Police Academy, La Toc and featured a platoon of police officers of remarkable characteristics. Moreover, they were all female.

Police Commissioner, SeverinMoncherry, said the idea of an all-female platoon was deliberate. It was a move that seems to have scored with the Governor General, who thanked the platoon and the Force for the gesture.

She had praises for the platoon on their precision in the slow and fast marches and the way in which each officer handled herself.

Dame Pearlette called on members of the platoon to strive for excellence in their careers and pointed to one of them making history as the country’s first female police commissioner. She also called on the police force to move from strength to strength to become the envy of police forces in the region.

Home Affairs Minister, Hermangild Francis, who was also present at the event, said he applauded the idea of a parade in Dame Pearlette’shonour when he first heard it from Moncherry.

He recounted his days as a police officer escorting Dame Pearlette during her inspections of the guard during parades. He said she loves a parade and, therefore, it was fitting to hold one in her honour and to say goodbye to her as Governor General.

Here’s a pictorial look at Dame Pearlette taking in her final parade and thanking members of the police force.