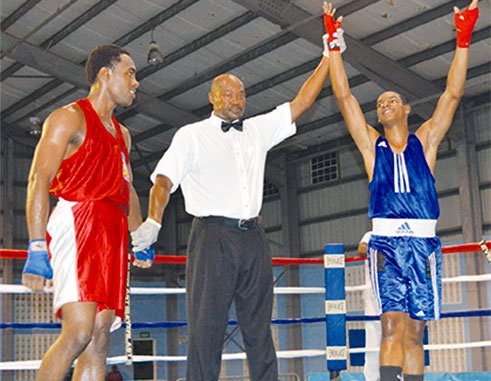 THE final lap of competition in the third edition of the Caribbean Boxing Championship takes place tonight at the Beausejour Indoor Practice Facility. Patrons coming in for the spectacle will witness a series of finals before the curtains come down with the announcement of this year’s champion team and the boxer of the championship.

On the opening night on Wednesday, Saint Lucia continued their dominance late into the evening in front of a disappointingly small crowd.

In the penultimate battle of the night, Lyndel Marcellin only needed 45 seconds into the second round to ensure the referee stopped the fight. Marcellin totally out-classed his opponent in the first round as he fired a series of stinging combinations at Kiomel Miller of Barbados to land him on the canvas and send the crowd to its feet.

At the end of competition on day one, the local national boxing team had already picked up 3 of the 4 fights on the card. Adrian Louis (Saint Lucia) lost to Donovan Henry (Grenada) in a Novice Welterweight referee-stopped contest in round 1.

Nathan Ferrari (Saint Lucia) was good on the night against Wynton Phillip of (Antigua and Barbuda) Elite Light Welterweight in (RSC) round two. JervelSinaise (Saint Lucia) defeated Anthony Matheson (Grenada) in a Juniors/Light Heavyweight in a unanimous decision (5-0).

In other fights on the night, Donavan Henry (Barbados) won over Prince Henry (Grenada) in (RSC) round 1 in a Novice Welterweight match-up.

Joel Williamson (Guyana) turned on the heat on Brandon Lee (Barbados), (RSC) in round 3. Collin Lewis (Guyana) defeated Justin Edward (Barbados) (RSC) in round 2. Amor Payne (Antigua and Barbuda) had the better of Kemar Gaskin (Barbados) on points (3-2).