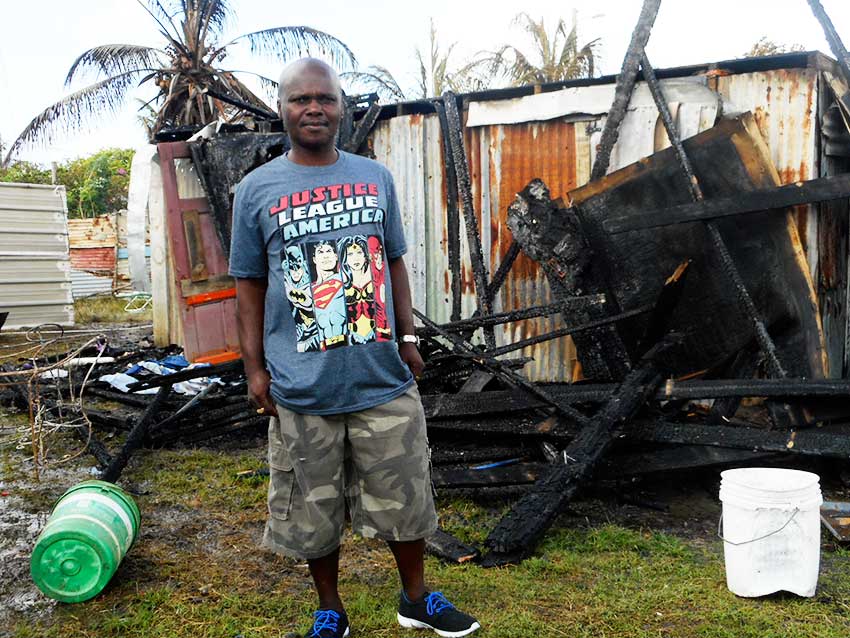 A family of three is now homeless after their home in Bruceville, Vieux Fort, was reduced to rubble by fire.

The incident occurred on Wednesday about 11:00 a.m.

The fire, fanned by strong winds, ripped through the two-bedroom wooden structure, leaving the occupant in the house at the time with no chance of salvaging anything, except the clothes he had on.

When the fire appliances arrived at the scene, the house was completely engulfed by fire.

“Everything in the house got destroyed. My two fridges, stereo set, beds, settee…,” Sylvester Dantes grieved.

He added: “The t-shirt and the pair of shoes I am wearing right now were given to me by relatives. Right now, we need help.”

Dantes, 55, was at the time living with his common law wife, Eve Joseph, 53, and her grandson. At the time of the fire, she was not at home.

Dantes said the only help they have been promised so far has been from the National Emergency Management Organization (NEMO), which promised to provide them with clothing.

Recounting his harrowing experience, Dantes said he was at the time taking a rest on the floor in his living room watching television when he took the smell of sponge burning.

“When I peeped to see what was burning, I saw a lot of smoke coming from the kitchen somewhere behind the fridge. I then ran back in the living room to take the television, but when I got close to the door I heard (a loud noise) and saw a big flame in front of me,” he recalled.

Dantes said when he saw danger, he scampered out of the house and found his neighbours trying to extinguish the fire, but to no avail.

He said since the incident his family has not gotten a good night’s rest.

According to a neighbour, they tried to alert Dantes of the fire while he was in the house, but he did not hear their shouts.

According to the Acting Divisional Fire Officer for the south, Ronald Pelius, they received the emergency call about 11:06 a.m., and responded immediately.

“However, when we arrived at the scene, the fire was already at an advanced stage,” Pelius said, adding that they had encountered difficulties at the scene which did not hamper them in the execution of their duties, nor worsen the situation.

“There was no water in WASCO’s main. But, normally, our first source of water supply is from our leading appliances,” he said.

Pelius said they responded to the fire with three domestic appliances and an ambulance.

He is calling on the public to be vigilant as it relates to how they handle electrical appliances and anything that can cause a fire, especially during the festive season.

The cause of the fire is under investigation.