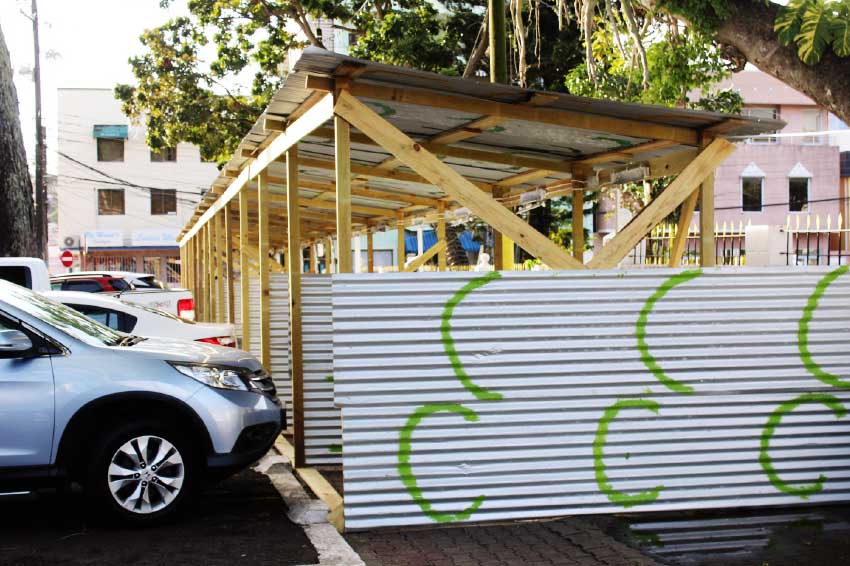 THE Castries Constituency Council (CCC) is attempting to bring back some nostalgia to Asou Square as it prepares for an event that has become a must-have for St. Lucians ushering in the New Year.

The above photo of a wooden structure with the galvanized covering located on the Derek Walcott Square facing Brazil Street easily tells one that preparations are underway by the CCC for the annual extravaganza.

But for those who remembered Asou Square back in the Eighties and further back, they will recall that the wood and galvanized sheets were the materials used for the booths on all four sides of the square.

Since the New Year’s fair returned to the “Square” not too long ago, organizers moved from using the originals booths to using tents on all sides of the “Square”.

This time around, Mayor Peterson Francis decided to bring back a bit of nostalgia to the three-day event by creating booths built out of wood and galvanized sheets on the Brazil Street side of the “Square” to bring “something extra, something long lost” to the event.

But bringing back old time entertainment like the Toes and their boloms, Masquerade, Pye Banan, the bus rides from Gros Islet and back, the chants and other forms of entertainment that dominated decades past is not going to be easy. Even Francis admits that that type of entertainment will not be easy to bring back, seeing that they seem to have vanished from the scene without leaving a trace.

Francis is not too sure how he will produce that special type of entertainment but he is certain that the entertainment the event will provide this time around will be top-notch as he has about $100,000 to spend on entertainment alone for the Sunday, Monday and Tuesday of the event.

“There will be steel pan music, there will be calypsonians, there will be entertainment,” he said, adding that this year the CCC is totally in charge of all aspects of the event unlike other years when the Cultural Development Foundation was part of it.