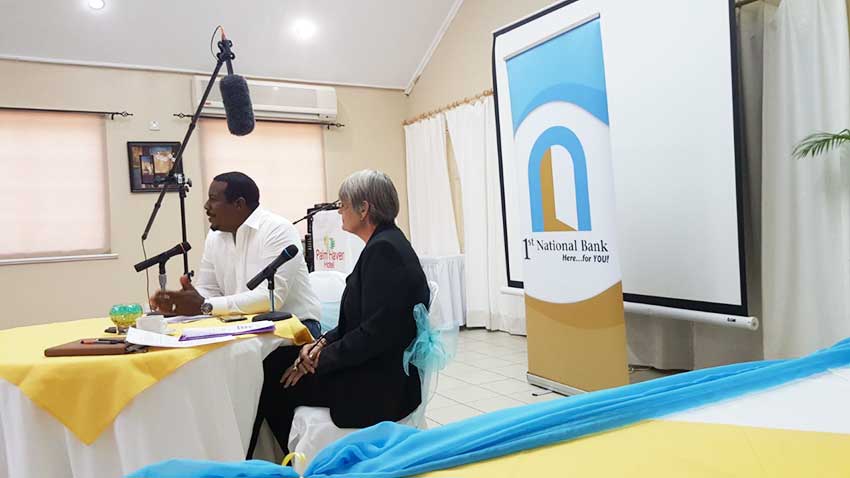 PRESS RELEASE – THE Board of Directors and Management of 1st National Bank welcomed an enthusiastic group of shareholders to the “Stanley A. French Shareholder Forum” on Saturday, December 1 at Palm Haven Hotel.

The annual educational event seeks to provide in-depth information to 1st National Bank investors, as well as an opportunity for dialogue on current issues and events affecting the regional banking industry.

As Saint Lucia’s first indigenous bank, 1st National has many “firsts” under its belt, and this year’s educational forum provided yet another as the feature presentations were conducted by Senior Risk Manager, Clarette Auguste-Taylor, and Managing Director, Johnathan Johannes, who joined the venerable financial institution in June this year. Chairman of the Board of Directors, Nigel Fulgence, welcomed the audience, which included a number of new shareholders who took advantage of the recent public share offer and were attending their first forum.

The subject matter of the presentations for the 2017 Stanley A. French Shareholder Forum Focused on the two biggest threats facing the Caribbean banking industry in the past five years: Money Laundering and De-risking. The tightening of regulations and the increasing level of legislation introduced by U.S. regulators against indigenous banks in the Caribbean and other regions have provided smaller entities like 1st National with a plethora of administrative and customer service challenges.

The first session, entitled “Anti-Money Laundering: Policies and Procedures”, was conducted by Auguste-Taylor, whose many years of experience in risk management have afforded her a level of local expertise unmatched in the Saint Lucian banking sector. Taking the audience through various methods used by money launderers to introduce “bad” money into the legitimate system, Auguste-Taylor described a dozen different legal instruments and international guidelines which apply to all commercial banks in the Caribbean region, and illustrated dramatically how the nefarious habits of money launderers can affect the Saint Lucian consumers if they are unaware of such scams.

If the 1st National Bank directors and shareholders thought they already knew about money laundering, it was evident from the animated reaction around the conference room that Auguste-Taylor was bringing new information to their attention. From the all-encompassing range of “high risk” businesses that draw closer scrutiny under AML regulations (including money transfer and exchange companies, to the blacklist of countries deemed “partner-non-grata” in the international banking industry), the insightful and knowledgeable senior manager did indeed educate the audience, at the same time imploring them to understand the challenges the Bank faces daily due to global criminal activity.

In another 1st National first, the feature presentation was in the format of a Q&A interview with Managing Director, Johnathan Johannes, who tackled the topic of “De-risking”, which he admits keeps him “awake at night because of the catastrophic effect it could have in the Caribbean.”

Despite increasing coverage of the threat posed by U.S. correspondent banks terminating their relationships with smaller, often indigenous bank, in the region, there is a need for more awareness within the banking community and, by extension, the public whose livelihoods are put at risk by de-risking.

Independent writer and marketing consultant, Dee Lundy-Charles, was on hand to ask the questions and she invited Johannes to frame the definition and background of de-risking in a Saint Lucian context. Describing the movement by correspondent banks in the USA to end relationships with “smaller, often indigenous” banks in the Caribbean and other regions as “de-costing” rather than de-risking, Johannes explained that as small fish in the large pond of international banking, institutions such as 1st National must bear the cost of increasing demands for documentation from international regulators, but that cost is often seen as prohibitive to an international bank who can choose to pull out of existing relationships as a cost-saving measure, despite the horrendous impact on “the little guys”.

Painting a picture of how the island’s economy could be impacted by de-risking, the MD spoke of Belize as an example of the chaos caused by correspondent banks ceasing to do business with local banks. Wire transfers, cheque clearing, financing for trade, credit and debit card transactions could not be processed, which resulted in business owners “flying to Miami with a briefcase full of cash” in order to pay for a container of food products or other basic consumables. Tourism is the mainstay of Saint Lucia’s economy, relying on foreign transactions perhaps more than any other sector, so the impact of de-risking could literally kill the industry in its tracks, should the worst case scenario occur.

If the dystopian possibilities described by the passionate Johannes are to be avoided, the sixteen-year career banker stresses that 1st National and every other indigenous bank in the region must step up and meet the international regulations, while at the same time challenging the regulators to think outside of the norm.

Offering the concerned members of the audience an upside, he described in glowing terms how this “disruptor” has already changed the conversation within the Caribbean banking community, with exciting initiatives being brought to the table and paradigm shifting alternatives being discussed at the highest levels. Johannes also stressed to the shareholders that 1st National Bank’s relationship with their correspondent Bank of New York remains strong and positive due in large part to the dedication and professionalism of the Risk Management team under Auguste-Taylor.

To quote Benjamin Franklin, “An investment in knowledge pays the best interest.”

As proceedings drew to a close on 1st National Bank’s 2017 Stanley A. French Shareholder Forum, it was clear that the directors and shareholders invested their time wisely by attending and gained valuable knowledge that will help them to play an active role in the bank’s development despite the external challenges of Anti-Money Laundering and De-risking.