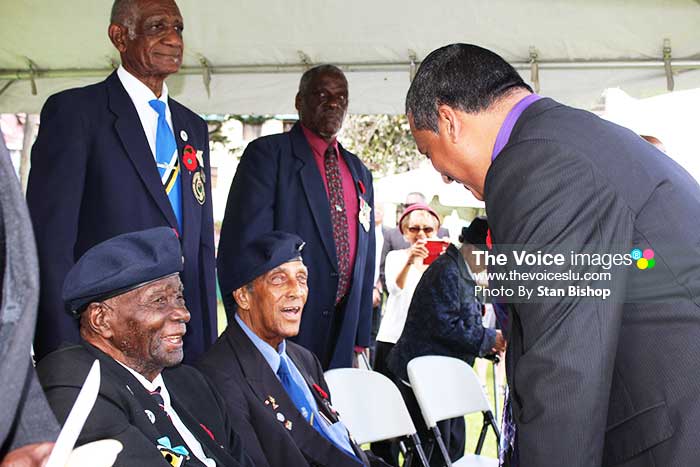 REMEMBERING the past and hoping for the best future was the underscoring theme last Sunday morning as Remembrance Day activities were in held in Castries.

Activities began at Derek Walcott Square with Governor General, Dame Pearlette Louisy, reading a short message in memory of the soldiers who served in the First and Second World wars, fought between 1914-1918 and 1939-1945, respectively.

A number of surviving war veterans came out for the occasion, including Cyril Haynes, who celebrated his 96th birthday on Sunday. Many wore the medals they were awarded for service to country as well as poppies in remembrance of fallen comrades.

“We are gathered together to remember before God and those who in two World wars gave their lives for others,” Dame Pearlette read. “With them we commemorate all who, in those Wars or in other battles of peace as well as war, gave their health and strength, suffered pain of body or of mind, and sacrificed themselves for the good of the world; and particularly we remember and commend to God all those who today fight for peace of the world and the greater happiness of its peoples.”

Prayers were offered by representatives from the Roman Catholic, Anglican and Methodist denominations, followed by the Secretary of the Ex-Service League, Earl Francis, reading the Act of Remembrance, to wit: “They shall grow not old, as we are left to grow old. Age shall not weary them, nor the years condemn. At the going down of the sun and in the morning, we will remember them.”

The Royal Saint Lucia Police Band played a number of renditions to accompany the solemn mood of the morning as passersby stopped to take in the sights and sounds. The band also played the national anthems of France and Saint Lucia.

A French military group, the 33rd Marine Troops Regiment, from Martinique was also here to participate in the Remembrance Day activities.

Wreaths were also laid at the Cross of Lorraine in George V Park and both anthems played.

French Ambassador to the OECS and Barbados, Philippe Ardanaz, spoke to The VOICE briefly about a female French national who served in World War II who attended this year’s Remembrance Day activity.

“She was a nurse. Last year, she told me, ‘I’m almost 80 years old’. I told her, ‘You don’t look 80 years old’. I know she’s 97 but she’s very active and looks very young. She told me she fought during the Second World War, so she can now do anything she wants. So she’s very proactive and always wants to be in Saint Lucia for this celebration, so she comes here every year due to the links Saint Lucia has with France,” Ambassador Ardanaz said.

Ardanaz said the French, who were at the time, fighting against the Germans and came to Saint Lucia during wartime, were well received. From Saint Lucia, he said they went to fight with the British troops to free France. It’s something, he said, for which France remains grateful to Saint Lucia.

“The occasion has a lot of symbolism, especially the Cross of Lorraine, which was a symbol of the Free French Forces in World War II,” he said. “It’s very important because without Saint Lucia, the situation would have been very difficult for people leaving Martinique and Guadeloupe and going to England to fight against the Germans.”