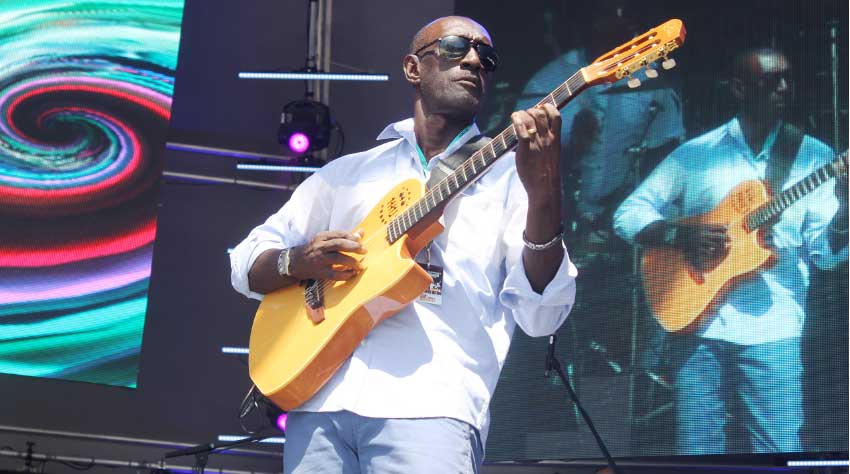 PRESS RELEASE – WITH not a moment to rest, the Events Company of St. Lucia Inc. (ECSL) has launched its plans for Soleil 2018. In a ceremony held on Wednesday in Atlanta, Georgia, a team from Saint Lucia, including Chief Executive of ECSL, Thomas Leonce; Minister responsible for Tourism and Broadcasting, Dominic Fedee; and Agnes Francis, Chairperson for the Saint Lucia Tourism Authority, unveiled plans for the Soleil Saint Lucia Summer of Festivals to an audience that comprised travel agents, tourism officials and other strategic partners in the United States of America.

“Understanding the value of the international markets to the sustainability of our Summer Festival, we felt it critical to launch in these regions early, while travellers are making the big decision about where to go for the summer,” said Leonce. “Coming out of Soleil 2017, we are well placed to identify the opportunities to make the Soleil Summer Festival even more viable. In 2018, we can look forward to some adjustments to the calendar, a strategic recalibration of the festival elements, so to speak, to create an even more viable events product that also sets us apart as a unique tourism destination for festival lovers.”

The Soleil Summer of Festivals will feature as its core line-up the Food and Rum Festival scheduled for January 12 to 14; Saint Lucia Jazz from May 6 to 13; Saint Lucia Carnival from June to July; followed by Roots & Soul from August 31 to September 2; culminating with Arts & Heritage Month in October.

Already, the line-up has been confirmed for one of the leading events, Saint Lucia Jazz. This highly-anticipated event has received much focus given its position as one of the most staple national events next to Saint Lucia Carnival. As such, this festival which has been given a makeover is positioned more so now as a Jazz Festival for purist Jazz lovers – a placement that differentiates it from other music festivals in the region and internationally.

“We are thrilled to see the inclusion of some of the elements that established our Jazz Festival from its inception,” noted Minister Fedee. “With the staging of more intimate, targeted Jazz showcases at our hotel venues, we have seen and anticipate that we can sell an experience that is sure to bring more visitors to Saint Lucia during this period. We have also considered how the overall festival fits into the international events calendar, taking into account the traveller patterns and the economic climate and international affairs, all of which lend to creating a product that is viable and sustainable.”

In 2018, Saint Lucia Jazz will feature A WORLD OF JAZZ at the Sandals Grande St. Lucian Spa & Beach Resort from May 7. Another hotel venue is the Harbor Club, the newest addition to the Saint Lucia hotel landscape. On May 10 and May 11, the Harbor Club will host A TASTE OF BOURBON STREET, a two-night dinner set featuring Jazzmeia ‘Jazz’ Horn. Also on May 11, the Royalton Saint Lucia Resort & Spa will host THE LINCOLN CENTRE JAZZ EXPERIENCE featuring five-time Grammy Award winner, Lalah Hathaway.

Avery*Sunshine caps it all off with her thunderous, gospel bred pipes and heart-to-heart content.

“We are off to a great start,” said Agnes Francis, Chairperson of the Saint Lucia Tourism Authority. “We are confident that we have created a brand and a product that is of the highest international standard. A brand and a product that will excite our international audiences, enticing them to come to Saint Lucia to experience world-class entertainment seasoned with a blend of Saint Lucian hospitality, cultural authenticity and exquisite island beauty.”

The Saint Lucian contingent continues on their way to New York and will, over the next few weeks, visit the United Kingdom and Canada where they will launch this international Soleil Saint Lucia Summer Festival 2018 Promotional Campaign.

Full details about Soleil – the Summer of Festivals can be found at www.stlucia.org/summerfestival.