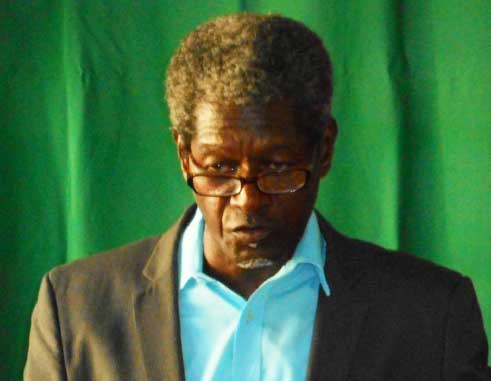 IT was truly a momentous occasion last week for the Williams family of Vieux Fort and residents of Bruceville when the Cohen and Bruce Williams Literary Award was inaugurated.

The event, a brainchild of renowned poet and writer, Modeste Downes, was hailed as a “fitting tribute” to Bruce Williams — after whom Bruceville was named — by the various speakers at the event.

The area was first called Shantytown, a name which many felt had negative connotation and, as a result, welcomed the changing of its name.

At the event, three students from Bruceville were awarded for attaining the first three places in an essay competition which targeted students of that community as part of the inauguration. Christa Raymond, who placed first, was awarded a trophy, a tablet and $250. The tablet was donated by Anne-Marie Campsell, a businesswoman of Vieux Fort. Second and third places went to Precious Yarde and Nerkisha Felicien respectively, who both received a smart phone and $100 each. The monetary prizes were donated by CDF.

Among those who attended the auspicious occasion which was held under the patronage of former prime minister, Dr. Kenny Anthony, were Deputy Permanent Secretary in the Ministry of Agriculture, Augustus Cadette; Executive Director of the Cultural Development Foundation (CDF), Melchoir Henry; members of the Williams family and a number of other prominent individuals from Vieux Fort.

In his presentation, Downes said: “What we are doing here is to say thanks to those who named the community after Bruce Williams.”

He said the event would serve to enlighten the young people of Bruceville as to the man their community was named after.

“It occurred to me that many of the young people of the community do not have a clue who was the man after whom their community was named,” Downes said.

As it relates to the essay competition, he said it was a deliberate decision not to include other communities but to make it the first time around exclusively to the young people of Bruceville who are being disadvantaged.

He, however, lamented that the number of entries and quality of essays submitted were far below what they had expected and desired.

Downes said had the competition been opened to other schools in the south, based on the quality and number of essays submitted, he is almost certain no child from Bruceville would have been qualified.

He also lamented that although having discussions about the award with the schools which took part in the competition, it appeared that they did not appreciate the idea.

“I get the feeling that they did not think, to a large measure, that it is worthy of those people it was being targeted at,” Downes lamented.

In his biographical sketch of Bruce Williams — affectionately known as “Daddy Bruce” – DPS Cadette said: “Bruce Williams was a gentle giant if ever there was one; a calm and unpretentious humanitarian whose simple acts of kindness touched the lives of many in this beloved town of ours as well as beyond. His devotion to the people, especially the children, was far from commensurate with his diminutive Ghandhi-like frame.”

He said the simple acts of kindness Bruce extended to the people of the south shall reside indelibly in the memories of the many who were the direct and indirect beneficiaries of that kindness.

According to Cadette, Williams, who won the Vieux Fort South seat under the United Workers Party a few times, was a humanitarian well before he was a politician.

In demonstrating the love “Daddy Bruce” showed to children, Cadette said Bruce had a habit of distributing treats to children, passing from street to street and house to house, calling on children, engaging them, seeing what they were doing and rewarding them with sweets, biscuits and toys or whatever he was able to procure.

“Bruce Williams believed in a child’s right to education as well as to the love of their parents and their community. He strongly believed that no child should be without a father, a value that he bequeathed to his children, and that he played his part in ensuring by trying to be a father to all children,” Cadettesaid.According to Cadette, in 1980, after Hurricane Allen, a powerful category 4 or 5 hurricane had destroyed St. Lucia, leaving thousands homeless. It was Bruce Williams, then Minister of Health and Member of Parliament for Vieux Fort South, who ordered homeless residents to occupy the space which is now called Bruceville.

“Before then, the said area was semi-marshland covered in vegetation and infested with stray animals. People were desperate in the wake of the Allen devastation. The poor understandably were hard-hit with less sturdy dwellings and low rates of insurance coverage,” he said.

Dr. Anthony, in his presentation, described the initiative as a “deserving tribute to Bruce Williams, and a “magnificent gesture” to award prizes to students of the community who placed in the essay competition. He added that it will inspire children in Bruceville to strive for success.

He described Williams a man of determination who would stand up for what he believes in.

“Bruce was gentle generous, compassionate, but also a fighter; once he believes in something, he will stand for it,” Dr. Anthony said.

He called on residents of Bruceville to play their roles in ensuring that the young people of the community do not fall along the wayside.

“Who will nurse them and allow their seeds to germinate?” he asked.

“My concern is that these children need to understand that they are as good as anybody anywhere in the world. People are not defined by who their parents are or the community in which they live. They will be defined by their passion, excellence, special qualities,” said Dr. Anthony, adding that a mechanism should be put in place to keep an eye on children to know what is happening to them in schools.

CDF’s Henry called on the children to read more so they will be empowered.

Jonique Williams, the daughter of Cohen Williams, described her father as a natural leader and one who has influenced many aspects of the St. Lucia community, especially in Vieux Fort.

She said her father, whose career began in accounting and gravitated into insurance and later went on to open his own brokerage firm, played various roles in politics.

“As Cohen developed into a person of authority in the business industry on the island, he decided to use his time and resources as well as his political legacy to participate in community-based activities,” Williams said.

She added that Cohen was a family man, which meant the world to him, and that he was determined to leave a legacy that will live beyond his time on earth.

There were also poetry recitation by Downes from his books of poems and book readings from Dawn French and Delisle Blenman. A poem was also read by a child from Bruceville.