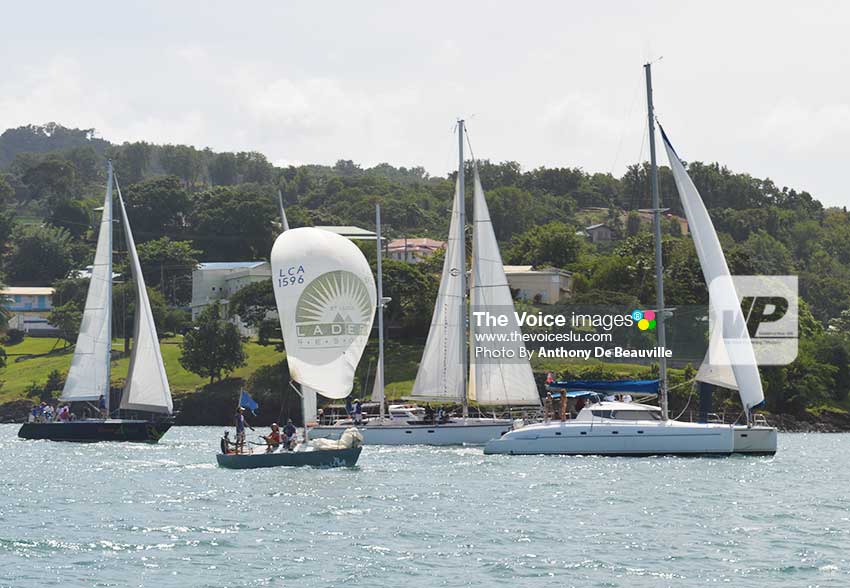 FOR the first time in staging the event here, there was no loud explosion from the usual cannon onboard the mother ship, “Reel Extreme”, to start the annual Saint Lucia Flotilla to coincide with the 32nd edition of the Atlantic Rally for Cruisers (ARC) which kicked off exactly at 12:00 noon on Sunday from Las Palmas de Gran Canariaen route to Saint Lucia.

Under clear skies and humid conditions, Sunday’s event was the best held in the last two years in terms of local participation. Close to 600 people on board a number of seaworthy crafts provided the usual party-type atmosphere riding the waves.

Simultaneously the 2017 Events Saint Lucia/Saint Lucia Tourism Authority ARC Flotilla unfolded from the Castries Waterfront and the IGY Rodney Bay Marina in celebration of the event.

Over 200 boats and 1,400 people — including 37 children — are taking part in this year’s ARC from Las Palmas de Gran Canaria, heading 2700 nautical across the Atlantic to Saint Lucia. As always, the ARC fleet represents almost every sailing nation and this year is no exception. Boats are registered in Australia, Austria, Belgium, Bulgaria, Canada, Denmark, Finland, France, Hong Kong, UK, Germany, Italy, Netherlands, Norway, Poland, Portugal, Spain, Sweden and the USA. Crews have also come from far and wide to take part, with 32 different nationalities represented.

“It’s very fantastic. We have an increase in the number of boats coming to Saint Lucia and this continues to be a good event. The yachting industry is one of our main sectors and continues to contribute significantly in the development of tourism and enhancement of our economy,” Fedee said.

He continued: “It’s a good day out and it’s really good to see so many (people from) the local sailing fraternity coming out and supporting the event. We expect a very good turnout in two weeks’ time when the ARC participants will start to cross the finish line in Rodney Bay.”

In terms of local participation in this year’s ARC, Fedee said, “I am not sure; you will need to ask the ARC people, I am not deeply involved.”

Meanwhile, under glorious warm sunshine, with a light breeze, a truly special atmosphere swept through the marina in Las Palmas de Gran Canaria on Sunday morning as months of preparations became final farewells, and yachts made their final checks before heading out to the start line for the 32nd edition of the ARC.

Over the past two weeks, crews from 40 nations around the globe have enjoyed the pre-departure programme in Las Palmas de Gran Canaria with a series of organised seminars, safety briefings and social activities before their crossing.

The crews have become an important part of the city, which was evident as the boats left the docks accompanied by a salsa band and calls of support from staff at businesses around the marina, and hundreds of well-wishers lined the seafront to wave off the boats on their Atlantic adventure.

It is a particularly diverse fleet this year with boats from 30-ft to 95-ft setting off on the same transatlantic course, including 156 monohulls, 28 catamarans and 2 trimarans. The sailors themselves are just as varied, aged from 3 years old to over 80. For some, Sunday’s start was a new experience, but there are also plenty of familiar faces who have sailed with the rally during its 32-year history.