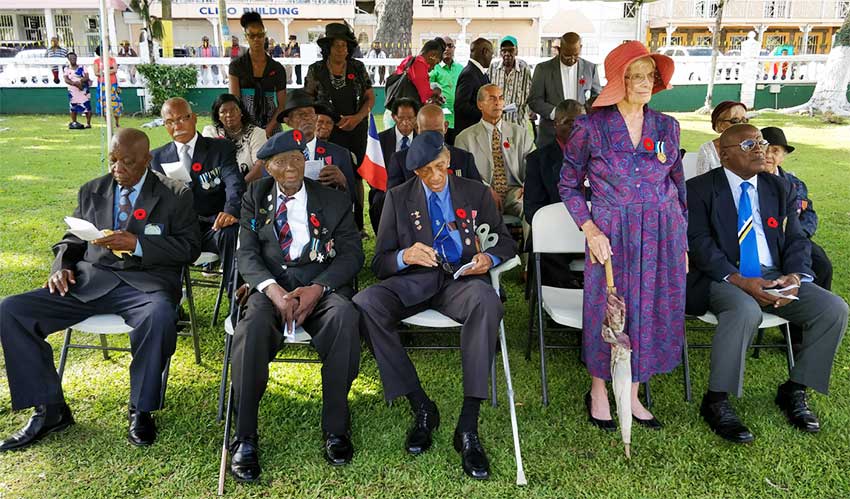 PRESS RELEASE – AS he addressed the annual Remembrance Day ceremony of the Royal Commonwealth Ex-Services League on Sunday, Acting Prime Minister Guy Joseph stressed the need for all Saint Lucians to be more knowledgeable about our country’s role in the wars of history.

The ceremony took place at the Official Residence of the Prime Minister, following the laying of wreaths at memorials throughout Castries, including Derek Walcott Square, George V Park and Choc Cemetery.

Said Minister Joseph: “I am truly humbled to be in the company of our ex-service men, and women and their families and to have taken part in the ceremonies of remembrance.”

Joseph noted that not enough is known, especially by our young people, about the brave men and women from Saint Lucia and the West Indies.

“We had faithful, brave Saint Lucians who put their lives on the line to allow us to be born in a part of the world where freedom is something we can treasure,” he noted. “We did not inherit that by our own doing. It was these brave soldiers who went out and risked everything to allow us to enjoy this freedom.”

Joseph recalled his school days of wearing a poppy, stating: “Whenever this time of year came, I remember as a child, (when) we bought the flower and dropped the money in a tin. But the true essence of what it represented was not well taught and I believe that we need to reset the button.

“Our children need to know, not just by the poppy, but to know the names of our ex-service members; to understand that the freedom that we now enjoy must never be taken for granted because some people secured it with their own blood. As a country, we have a responsibility. If we do not know our history, we are likely to repeat the mistakes of the past.”

Joseph pledged the support of the Government of Saint Lucia in keeping the memory of servicemen alive, adding that: “On this Remembrance Day, we salute you, we appreciate your service and we will continue to honour you and ensure that your stories live on in our history.”

He also encouraged all Saint Lucians to support the Poppy Appeal year-round.