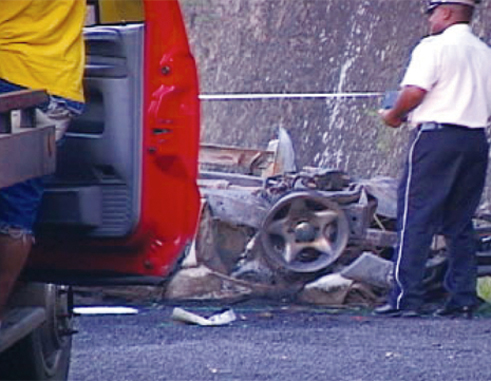 SO far this year, at least fourteen people have been killed on our roads as a result of vehicular accidents. While the circumstances that led to these deaths might be debatable, there is no denying that we all need to use the roads wisely.

Especially whenever there are national events – such as this weekend’s Jounen Kwéyòl – there is often the propensity for drivers and pedestrians to lose sight of the fact that the roads can be deadly whenever safety is suspended. One bad decision can result in a tragic loss of limb – or worse – life.

At many of these activities, alcoholic beverages are a common feature. So much so that some people tend to drink more than they should. While for some this might not seem a problem, for others getting into verbal and physical fight is the norm. Even worse, though, getting behind the steering wheel while inebriated, convinced that you are safe to drive, has dangerous consequences.

That is why it is so important that those who intend to drink alcohol over the weekend should heed the warnings of the companies selling it: drink responsibly. If you’re unsure about what your drinking limit is, designate a friend as your chaperone to tell you when they recognize your normal behaviour is being taken over by the spirit in the bottle. Even better, do yourself a huge favour by allowing someone else to drive you home if you feel tipsy if you cannot yourself gauge your drinking habits.

According to information provided by the Substance Abuse Advisory Council Secretariat of the Ministry of health, heavy consumption of alcohol should be avoided as intoxicated people often make bad choices that can endanger not only themselves but others.

Also, the average person can only digest one ounce of alcohol (or one standard drink) per hour. Basically, that’s one of the following: one beer, one glass of wine, one shot of liquor. However, women are advised to allow more time between drinks and it is advised that people should not drink alcohol on an empty stomach.

While much of what is stated here would have been said before, studies have proven time and again that repetition is crucial to learning. As such, we prefer to err on the side of sounding monotonous in this regard, if only it can save something precious that you cherish – your life. After all, it is better to preempt the worst by offering the best advice. We certainly cannot tell anyone not to drink but we believe it to be only prudent that they do so with some measure of responsibility.

At the current rate, we have already recorded more than one death per month due to road accidents. The law of averages should tell us that driving under the influence needs to come to a complete stop.