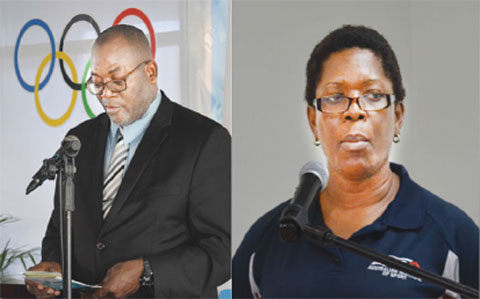 WHEN it comes to attracting talent and producing champions, a number of sporting disciplines in Saint Lucia are probably at their lowest. I have been around for a while and seen the ups and downs and, by the look of things, we are probably in our worst cycle.

I don’t know if there’s one main cause for the decline, but I think there are a few reasons. Today, we are probably seeing the result of what didn’t happen 10 years ago. I have heard of five-year and ten-year plans that will reap results, but yet none has been implemented to improve or even move us from point A to B.

When things were generally going well for us in the mid-80s, I don’t think there was enough work put into the promotion of sports and getting young athletes involved. I believe where we are at now that is still our biggest problem.

Sports in Saint Lucia at present can best be best described as lacking direction and without a sense of purpose and pride. The stakeholders, such as the Department of Youth Development and Sports, the leaders of the various national sports federations, the National Youth and Sports Councils, the Physical Education Teachers Association and clubs must do something quick to put sports back on track for the sake of the young people.

We can make it if we try just a little harder and put our monies where our mouths are. Sounds like a pledge, so why not adopt it?

The Department of Youth Development and Sports’ Schools Sports Programme commenced the 2017-2018 season with three sporting disciplines: Under-19 male basketball, Under-15 and Under-19 male football and Under-19 netball.

Interestingly, there was no official launch of the programme and it is not even clear as to who’s sponsoring what this time around.

To date, the performances on the court leaves a lot to be desired and some of the scores tell the true tale of where we’re at presently in our development.

In a basketball encounter, St. Mary’s College defeated SDA 35-15, but what amazes me was the score at the end of the first quarter, 12-0 in favour of SMC.

Also last week, there was a 10-5 win for Clendon Mason Memorial over Beanfield in Under-19 netball.

One may argue that is okay and that they should be given a break because it’s their first year. Really?! The organizers of these tournaments must come up with a dynamic plan and stop wasting people’s time as these young men are not serious about sports anymore. That is the reality. So why force them into something they are not interested in?

Cricket is not doing too badly in certain schools; and volleyball and track and field are neither here nor there. Both tennis and table tennis seem to be keeping their heads just above water while swimming continues to hold its own. The results are there to prove it.

We need a 180-degree turn in the way we do things, but for some people involved, it’s okay, let’s get it done, anyway. Yet, you expect us to compete against the region’s best. I am allowing you, the reader, to make your own judgment.

Back on the court, it’s mindboggling because after the game between Babonneau Secondary and Castries Comprehensive School, coach of the Babonneau Secondary, James Solomon, when asked what he attributed to the low score, said, “Lack of preparation, training and patience and the players need a little more fine-tuning.”

He was honest and straightforward.

So, there you have it, a team with no preparation at all for an explosive game came unprepared. But one must applaud Babonneau for their exploits in cricket as Kimani Melius continues to lead their charge. Well done, BSS!

I am taken aback when you tell me you have a ministry with three ministers, all of whom played national sports, and not one has said what he/she will do for sports.

Our politicians must always bear this in mind that a vote from those young men and women of voting age is a serious thing. They are very choosy as to whom they are voting for; it is their right to vote for somebody, likewise it is also their right to stay home and relax in their arm chairs and watch international sports all day and vote for nobody.

So if you say all throughout your campaign at your various stops to give you a chance in office to serve the youth, then you’ve been given that chance to serve and no matter what they do under any circumstances — including poor playing surfaces, poor lighting – you, the politician, will be considered their worst enemy.

I remember Youth Director, Mary Wilfred, saying to the coaches that their intentions at the Department are not only for our programmes to contribute the holistic development of young people but to further ensure they play a role in problem-solving — to provide a solution that will lead to the reduction in young people engaging in crime and violence in Saint Lucia.

On Monday, October 17, School Sports Coordinator, Isabel Marquis, met with coaches within the department where she told the coaches to keep a professional deportment while carrying out their duties.

The question here is: who is taking the advice, who is listening and who is implementing? Only time will tell.

I am keeping my fingers crossed, and eyes and ears open that something positive will come out, but certainly not in the near future as it remains a mammoth task and challenge ahead for these coaches with limited resources.

Finally, I want to see a change in player and coach attitudes on and off the field. I am seeing other players from outside really hungry to win. It seems our lifestyles are too easy here. Our younger players have to realise hard work is very essential. They really have to commit and want to do it for themselves, family, community, schools, national sports federation, clubs and Saint Lucia.