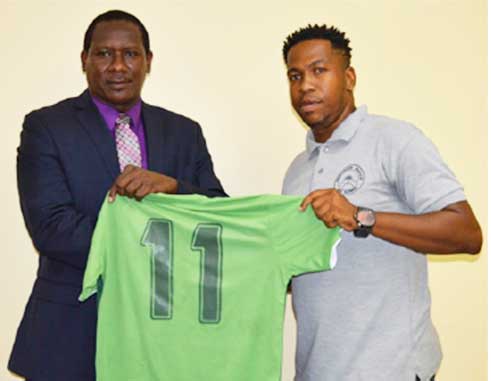 Following the marchpast of teams at 12.00 p.m., the action will kick off with the much- anticipated Soccer Rama.

At the press launch held on Thursday evening at the Royal Saint Lucian Hotel, President of the GIFL, Shane Paul, said, “This annual tournament has brought much success to the development of the youth players who have played an important role in our district team success.

“Community relationships have strengthened and our success throughout the district has grown. Our partnership with the private sector, thus allowing business-houses to compete in this year’s tournament, is a plus for us.”

Paul said the main aim as a league is to grow and develop a club structure, which has been the mandate of the Saint Lucia Football Association ((SLFA).

“We should, as a football family, embrace this opportunity with this tournament. I pledge as president that discipline, commitment and hard work by all involved will be winner,” he noted.

Meanwhile, Montoute said it has always been his desire to see sports develop in Gros Islet. With football being one of the more popular sports, he said he was happy to have a fully-sponsored tournament this year.

Montoute thanked the NLA and GIFL for their input in facilitating this year’s competition. However, he warned the various representatives present to build on the foundation that has been set when it comes to football in the north of the island. Gros Islet, he said, has had a long history of exciting and competitive football and at one time attracted players from outside.

He also presented complete football kits to four of the participating teams as a form of encouragement. The recipients were GMC, Dominators, Northern and Gros Islet Football League.

Meanwhile, all participating teams must be present at the tournament’s grand launch tomorrow. Teams must ensure that 12 or more players are present for the marchpast to secure bonus points. Any team which does not show up for the tournament’s marchpast receives a fine of $150, which must be paid before the team’s first match.

The round robin tournament kicks off on Wednesday from 5:00 p.m. at the Gros Islet Playing Field.