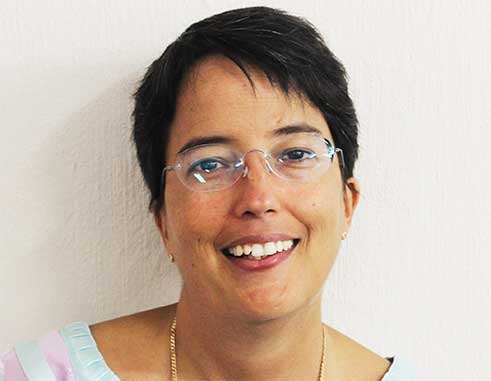 Visual Artist Gray Butte, , says he is on a mission to use his work to get people to become more connected with their roots.

Butte recently held a public exhibition – dubbed “Mask of Ten” — at the Embassy of Mexico in Vigie through which he hopes Saint Lucians would pay greater focus on their cultural identity. The Embassy, which has supported the arts in Saint Lucia for many years, said Butte’s work speaks directly to the human spirit.

Butte said ten paintings in the exhibition — selected from among nearly 50 pieces — epitomize mask expressions in a more abstract form.

“My masks usually express the deeper cultural expressions of our people as opposed to the usual everyday paintings about mountains, market scenes and festivals,” he told The VOICE. “I think we have a deeper spiritual in this land – an ancestral connection – which is presented in my masks.”

The artist said the subject matter in his paintings are not limited to Saint Lucia but are more of a Caribbean expression “because I think the Caribbean has a collective history”.

“We have had a lot of rich experiences that have brought us to where we are today and what we stand for,” Butte said. “But the process is ongoing – we’re still searching for ourselves and trying to develop ourselves as a people,” he said.

Butte said he fell in love using the concept of the mask after starting out by carving two-dimensional masks. After feeling the need to have another form of expression for his work, he figured the best way to do so was by painting on canvas, which afforded him the opportunity to play with more colours, mediums and perspectives.

“The masks are a continuous collection, so I’m going to continue painting masks until I have 50 of them,” he said.

One of the paintings that was part of the recent exhibition, “Machinery of State”, was up for auction, with the proceeds going to two crucial institutions: the Saint Lucia Blind Welfare Association (SLBWA) and Msgr. Patrick Anthony Folk Research Centre (FRC). However, the painting will be donated to the FRC following the auction. He believes that giving back should be part of every artist’s vision.

“I felt it was fitting to support these organizations that are so keen on advancing the cause of people. So they need all the support they can get,” Butte said.

He also thanked the Mexican Embassy for its support in hosting the exhibition earlier this month, adding that he hopes to work with them in the future.

“The Mexican Embassy has been a very key support in this effort, so I really want to thank them for recognizing my work. I think the collaboration is very meaningful,” Butte said.

Butte said he has plans for an upcoming exhibition to be held in England next year.

Maitre Narvaez, Deputy Head of Mission at the Mexican Embassy in Saint Lucia, said facilitating initiatives like these is of utmost importance for the Embassy. For the past three years, she said, the Embassy has been very interested in opening its doors to forms of art and widening its relationship with Saint Lucia.

“We don’t want to be partners only politically and through cooperation development – we also want to open the doors to discussions about art,” she told The VOICE. “We also believe that the exchange of cultures is a very powerful tool to deepen the understanding between the two countries.”

Among the aims of the Embassy, Narvaez said, is to provide Saint Lucians with a space within which they can find their own art in different perspectives. In that regard, the Embassy has hosted exhibitions featuring the St. Omer family, as well as for Nobel Laureate Week. The Embassy, she said, will continue in that vein.

“There are not that many spaces to present graphic art here, so it’s very important for us,” she said. “We at the Embassy are amazed at the depth of the creativity of the Saint Lucian people. If you see what the St. Omer family and Gary do, you’d notice that it’s completely different. But at the same time, the creativity stands out. We wanted to give Saint Lucians the opportunity to reflect on their own legacy and where they come from – also where our two societies can meet.”