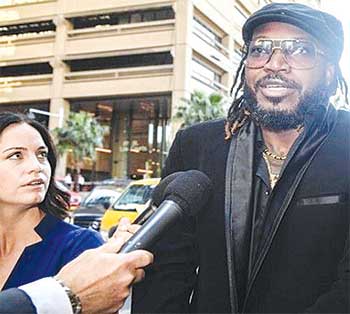 CHRIS Gayle prevailed in his defamation case against Fairfax Media, after a four-person jury in the New South Wales Supreme Court found that there was insufficient evidence to prove he exposed himself to a massage therapist in a Sydney dressing room during the 2015 World Cup.

After deliberating for a little less than two hours, the jury concluded that Fairfax Media — which publishes The Sydney Morning Herald, The Age and the Canberra Times — had not justified its January 2016 report of the allegation on either the basis of truth or of qualified privilege, which weighs up the public interest value of published information and whether or not the media outlet acted reasonably.

The massage therapist who made the allegation, Leanne Russell, testified in court last week that she cried uncontrollably after Gayle pulled down his towel to expose himself while saying “is this what you’re looking for?” during a training session at Drummoyne Oval. Both Gayle and his teammate Dwayne Smith gave evidence denying that the episode took place.

Russell had contacted the sports editor of the Age, Chloe Saltau, to tell her story after she saw the infamous interview of Gayle by the broadcaster Mel McLaughlin in January 2016. Russell also said that the incident with Gayle had followed another, when Smith had sent her a text message saying “sexy” while she had been giving him a massage.

Speaking for Gayle, barrister Bruce McClintock said Russell had been “bitter” and “vengeful” in targeting Gayle. Russell, who now works as an executive assistant for the AFL, stated in her evidence that she had wanted to take a stand for women in sport.

“I was sick of being treated that way,” Russell said in evidence. “I was someone who had forged my career in sport. I would never be as successful as I would be if I was a man.”

Russell had made a verbal complaint at the time to the West Indies team manager Richie Richardson, who had then sent an email to the team requesting them to “please at all times, treat her in a respectable and professional way”. In his evidence, Gayle had insisted the incident “did not happen”.

After the verdict was read out, Gayle spoke of his relief outside court.

Following the verdict, Fairfax Media indicated concerns with the conduct of the case and that the company would be considering an appeal.

“Fairfax Media is concerned with the conduct of the trial to the extent that on Friday it sought an order that the jury be discharged and a new trial ordered,” a spokesperson said.

“The Judge [Justice Lucy McCallum] accepted that the jury had been misled in a way that prejudiced Fairfax, but declined to discharge the jury. Fairfax believes that it did not get a fair trial. It is seriously considering its appeal rights.”