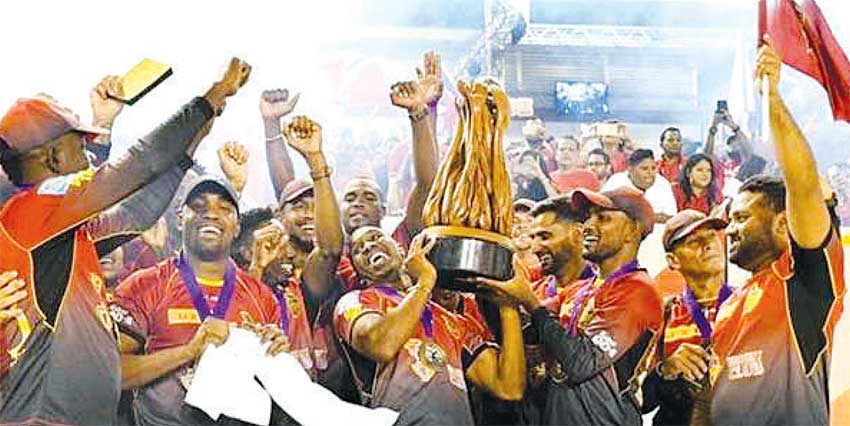 In a low-scoring thriller, Kevon Cooper’s late assault took away the game from the visitors in a tense chase.

Trinbago Knight Riders were 90 for 7 at one stage and still needed 28 off 13 balls when Cooper ambushed Sheldon Cottrell and Ben Hilfenhaus in a dramatic seven-ball sequence to clinch victory with an over to spare.

It’s the Knight Riders franchise’s second CPL title, and the first since they changed their name, following their first title as Trinidad & Tobago Red Steel in 2015.

The Patriots, one of the most powerful batting line-ups in the tournament, were kept to a mere 135, thanks in part to an excellent early burst from Javon Searles.

Given the new ball on Saturday, he struck in his first two overs, getting the big scalps of Chris Gayle and Mohammad Hafeez. The Patriots slipped to 11 for 2 in four overs.

Sunil Narine then bowled a great spell of 4-1-8-1, pinning Evin Lewis lbw for his only wicket.

Cooper then picked up two wickets to put Patriots at 65 for 5.

However, Carlos Brathwaite and Mohammad Nabi then played crucial knocks late in the innings to add 56 runs off the last 4 overs.

Chasing 136, the hosts were put under pressure by Sheldon Cottrell’s miserly opening spell. He took two wickets in three balls, getting Narine and Dwayne Bravo.

Colin Munro then provided a valuable 29. However, Darren Bravo fell just for one. Hamza Tariq made an assured 18 that was vital in the final’s context.

Knight Riders lost three more wickets in the first five overs after drinks, making it 90 for 7.

But Cooper smashed Cottrell for six over extra cover to end the 18th, bringing the equation down to 22 off 12. After a single from Ramdin put him back on strike, Hilfenhaus bowled two costly wides outside off. Nabi turned a four into two with a diving stop at midwicket off the next ball, but next a no-ball was smashed over cover boundary.

Cooper earned another four off the free hit and Cooper made it three boundary balls in a row when he smoked Hilfenhaus again over the leg side.

They took two singles to finish the match.