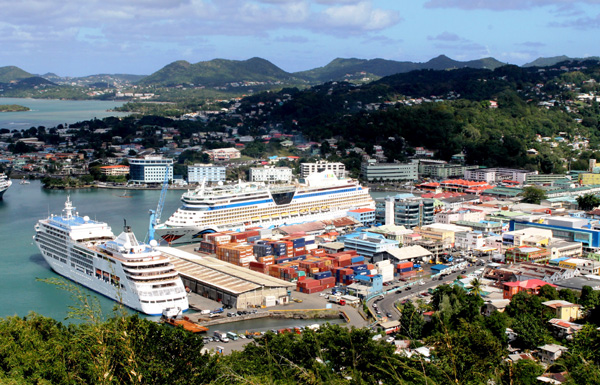 MAN has always had a fascination for travel, the urge to discover the unknown, to explore new and strange places and to seek changes of environment and undergo new experiences. Tourism, as we understand, is a relatively modern origin distinguishable by its mass character.

The migration of millions of people to the coast and country every summer is essentially of English origin that has led to important social repercussions, namely an increase in leisure activities, improved education, higher standards of living and an overall development in the transport and communication systems.

The islands have much to offer the tourist: almost perfect weather, never too hot, never too cold and abundant sunshine, beautiful and varied scenery with many superb beaches, superlative conditions for swimming, watersports and sailing, a rich cultural background and much local colour.

Undoubtedly, the natural attractions of the West Indies can scarcely be matched anywhere else in the world. The most important factor in the growth of the Caribbean tourist trade has been the region’s proximity to the prosperous United States. Within a matter of hours, Americans can exchange the oppressive heat of summer or the rigours of winter for the delightful conditions of the Caribbean islands.

One of the most remarkable growth businesses of modern tourism has been Caribbean cruising. Year after year, new ships have rushed to an area which seems at times to be specifically designed for the business. Passengers are increasingly attracted by the Caribbean which, for the moment, has one real international competitor — the Greek Islands.

Resorts have reached to the commercial opportunities and there have been extensive investments in portside facilities, such as craft markets, shopping and restaurant areas and provision for inland tours. Resorts around the islands are geared to the arrival of the next ship.

Clearly, cruise passengers are not likely to spend as much money as those stay-over visitors that may normally spend a week or more. At times, many cruise visitors find the places of call so attractive that they decide they will make a return visit for a much longer stay.

There were 29 million tourist arrivals in the Caribbean last year, the first time in history in the region. Once again, the region has recorded faster growth than the global average. There was an increase by 4.2 per cent in 2016 — better than the 3.9 per cent overall internationally despite the political uncertainties, security and economic challenges in its main source market.

Cruise passenger arrivals grew by an estimated 1.3 per cent to approximately 26.3 million, outpacing land-based business, as reported by the Caribbean and Tourism Organisation (CTO).

The Caribbean saw its strong growth from Europe despite terrorist attacks in some countries, the Brexit referendum in the U.K. and bumpy economic outcomes across continental Europe. Caribbean arrivals from U.K./Europe climbed by over 11 per cent to reach 5.6 million.

The United States, however, continues to be the region’s primary long-stay market, increasing by 3 ½ per cent and providing just about half of all arrivals. The Canadian market remained feeble and intra-Caribbean travel continues to be a vexing issue.

The Dominican Republic is the largest of the Caribbean destinations and is usually the top in arrivals with a figure of 5 million annually. The country’s strong numbers were buoyed by a very solid summer season in 2016, during which the Dominican Republic saw an 11.7 per cent jump.

The United States remained the country’s single largest source market with 1.78 million U.S. arrivals and a 12.4 per cent growth rate, although the country saw the strongest improvement in areas outside of the U.S., Canada and Europe.

The Dominican Republic’s administration has announced a stated goal of reaching 10 million annual visitors by 2023.

Four million tourists visited Cuba in 2016 — its most dynamic sector. They realized a 13 per cent growth higher than the last year. The year 2017 is expected to see a dramatic increase with an anticipated US$3 billion to Cuba (offers according to experts). Plans are afoot to construct 108,000 new rooms by 2030 that includes hotel, golf resorts and new marinas. An increase in the number of international airlines flying into the many airports in Cuba facilitates the increase in tourism numbers.

Tourism is big business in the Bahamas and a mainstay of the economy, contributing nearly 40 per cent of the country’s total gross domestic product. An estimated US$1.3 billion is spent annually by more than 3.2 million visitors, which supports half of the labour force and produces 70 per cent of the government’s tax revenue.

Tourism in Puerto Rico attracted about 5 million visitors in 2016. Tourism has been a money revenue industry for this country for a number of decades given it is host to diverse natural wonders, historic, cultural buildings and sporting events. The industry remains extremely resilient despite a challenging year and contributes nearly US $4 billion dollars to Puerto Rico’s economy. It is the number one homeport for cruise ships in the Caribbean, attracting the world’s newest and largest vessels.

Approximately 3.5 million tourists visited Jamaica last year, comprising 2 million stop-over tourists and 1.5 million cruise visitors, which is a million more than the inhabitants of the country. There are currently nearly 3,000 new hotel rooms under construction. From January to October 2016, Jamaica recorded earnings of US$2.06 billion, which represented a 5.7 per cent increase over the same period last year, according to the Ministry of Tourism.

Barbados welcomes approximately 1 million visitors annually, the ninth most visitor arrivals in the region. The tourism industry generates 50% of the country’s foreign exchange and the island is the number one destination for U.K. visitors and 557,898 cruise passengers.

Barbados’ tourism product will receive an injection of over US$1 billion in tourism investment through to 2019 from several major projects that are currently on stream.

Trinidad and Tobago looks to offset lower hydrocarbon revenue with a strong increase in tourist arrivals that is providing a more optimistic outlook for diversification. The government is aiming to leverage niche offerings in the cultural and heritage segment to see this growth continue. In-bound arrivals increased by 6.6% last year to nearly 440,000 visitors, according to the Ministry of Tourism — well above the global average of 4.4 per cent growth.

The British Virgin Islands enjoy one of the more prosperous economics of the Caribbean region. The twin pillars of the economy are tourism and financial services. Politically, tourism is the more important of the two as it employs a greater number of people within the territory and a larger proportion of the business in the tourist industry are locally-owned, as are a number of the highly-tourism dependent sole traders (for example, taxi drivers and street vendors).

Tourism accounts for nearly 45 per cent of the national income, with continual positive growth in the sector. Initial figures for January to July 2016 showed an increase of 27.3 per cent for all visitors when compared to the same period in 2015.

Antigua and Barbuda has seen an increase in its stayover arrivals during the month of September 2016, compared to the same period in 2015.

St. Lucia recorded a 6.4 per cent increase in tourism arrivals during the first five months of the year. Total stay-over arrivals to the island was 157,077, up by 5.5 per cent from the previous year of 2014.

The greatest percentage increase, however, was noted from the Caribbean which stood at 22,142 arrivals at the end of May, a 21 per cent increase from the same period last year.

Extension works will be taking place at the duty-free area, Pointe Seraphine, which will allow mega vessels to berth there that would definitely improve the level of cruise tourism. The terminal outlets would be upgraded considerably, thus contributing in augmenting the vibrancy of the capital city.

In the 1960s and 1970s, the Caribbean region was wide open to any sort of commercial tourist deal. The small territories, most of which were only just emerging from colonial rule, almost fell on their knees to get outside investment. Hotels were put up under regulations, which permitted long tax holidays and beaches were often alienated out of the public domain into the hands of private interests. The results produced some quick fortunes, but also produced a legacy of bitterness and resentment.

There are some governments in the region which are prepared to stand against the pressures of the tourist industry and are attempting to introduce a measure of control on the hoteliers and tour operators while others, for some reason or other, are reluctant or unwilling to have a firmer grip on the industry.

There must be more local control of the industry because the economic variability of our country is intrinsically linked to its citizens’ level of participation in its economic activities. The emergence of community or village tourism will certainly foster more local participation with the potential of being more rewarding to them.

Community or village-based tourism bridges the social and economic gap of rural communities. This form of tourism affords the inhabitants of their region to become tour guides and provides services to visitors. It also provides communities with an opportunity to play a role in generating movement in the elements of production and exchange of goods and services in their own locale.

Today, community-based tourism is in constant evolution not only in the greater Caribbean, but also in Africa, Asia and Latin America, generating more active tourist participation in the customs and habits of a particular social group or locality.

There are a number of benefits in the communities participating in tourism development, such as poverty reduction and employment generation. Additionally, this approach decentralizes the tourism industry through the transfer of decision-making to communities while also acting as a stimulus for the production of local products.

This form of tourism provides benefits and minimizes negative impacts and contributes to members of the communities getting involved to protect their cultural and natural heritage and benefiting directly from such initiative. Sustainable tourism cannot be successful without the participation of communities in the development process.

There are examples of success in this area, as in the case of Jamaica, where the community tourism network “country style” and the programme “unique Jamaica” have been successfully implemented, aimed at promoting community-based tourism in Jamaica and internationally offering visitors a diverse community or experience during their vacation. Dominica has found some success in community or village tourism also.

There must be a strong collaboration and a harmonious relationship between government agencies and non-governmental organizations, associations as well as service providers within the industry so as to ensure the sustainability and longevity of that all-important sector within the tourism industry.