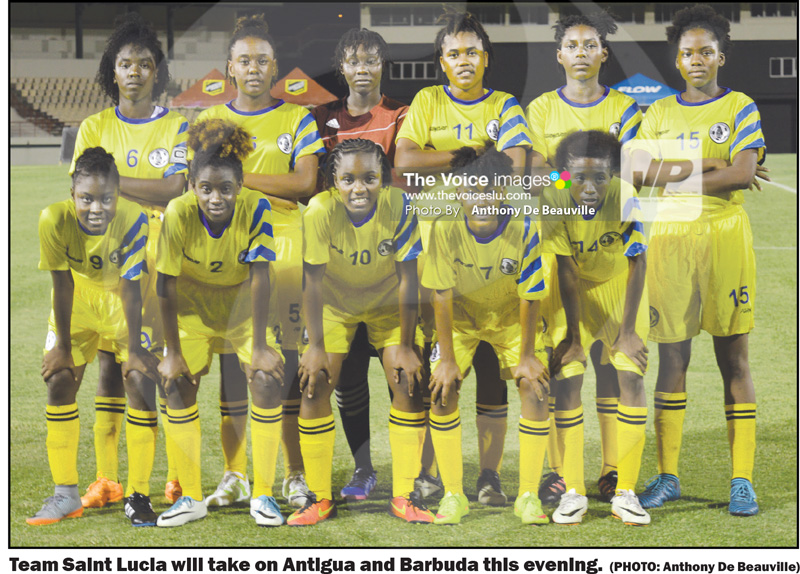 SAINT Lucia has a very slim chance of qualifying when they play their final match in the CONCACAF/Caribbean Women’s Under-17 qualifier against Antigua and Barbuda this evening at the Daren Sammy Cricket Ground. The match starts at 8:30 p.m.

The hosts are second in Group C, behind Bermuda, and will be hoping team Aruba can beat Bermuda in their match-up at 6:00 p.m.

Surprises and miracles do happen in sporting events like these and Saint Lucia will be banking for the extraordinary to happen this evening.

Regardless of the outcome in the first game, Team Saint Lucia knows exactly what they have to do as the best second place team will go through into the next round of competition.

Saint Lucia lost a golden opportunity by failing to score at least 15 goals against Aruba on Thursday evening. However, in a must-win situation for Saint Lucia, the hosts did not disappoint their fans as they defeated Aruba 5-0.

Ilana Lashley opened the scoring for Saint Lucia in the 12th minute while Cassandra Shephard doubled the score-line in the 31st.

The resumption of play saw several scoring opportunities going by the wayside for Team Saint Lucia. In the 78th minute, Aruba walked off the pitch with most of the members of the team in tears when Saint Lucia was leading 2-0.

The coach of the Aruba national team was seen instructing his players to get off the field with 12 minutes still to play. One player from Aruba was injured on the field, which resulted in the other members displaying emotions as they headed to their locker room.

The Aruban coaches complained about the referee calls on the field and the injuries to their players.

With Saint Lucia’s crowd support behind them, the home team moved into turbo mode throughout the entire game.

Following nearly an eight-minute break, and a stern warning of disciplinary action to the Aruban team by match officials, the team returned to the field of play.

“You need to lose with dignity,” said the match official as he addressed the team in their dug out. “Whether the score is 15-0 or 2-0, you have to complete the game.”

After this intervention by the CONCACAF official, the Aruba team returned on the square. Interestingly, no yellow cards were issued to the team or the coaches for their actions.
Within two minutes of the restart of play, Saint Lucia forward Vionce Weeks found the back of the net to make it 3-0, much to the joy of her teammates and the 350-plus crowd in attendance.

Two minutes later (83rd), Britanya St. Prix’s powerful long range shot eluded the Aruba custodian Jeanylitza Figaroa to made it 4-0 while Krysan St. Louis, who was denied at least five scoring opportunities by the goalkeeper, finally found the back of the net with her typical solo run to make it 5-0 in the 86th minute.

CONCACAF event coordinator, Christopher Craig, who spoke to The VOICE during the unfortunate incident said, “Basically, if Aruba were to abandon the game, they would lose. They would forfeit points, as well as get sanctioned from CONCACAF. They were upset with fouls and calls not going their way.”

In the first encounter on the day, Bermuda continued their goal scoring spree as they trounced Antigua and Barbuda 5-0 in a lopsided affair. The Antiguans were a shadow of themselves compared to the way they played their opening encounter on day one of the tournament. 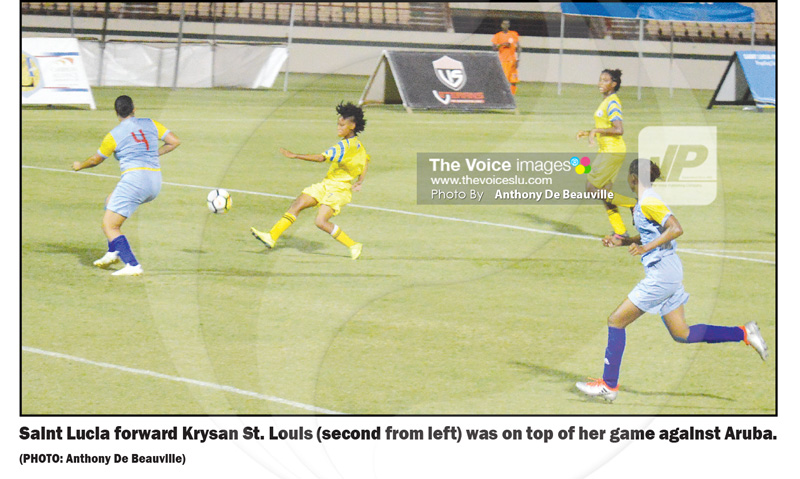