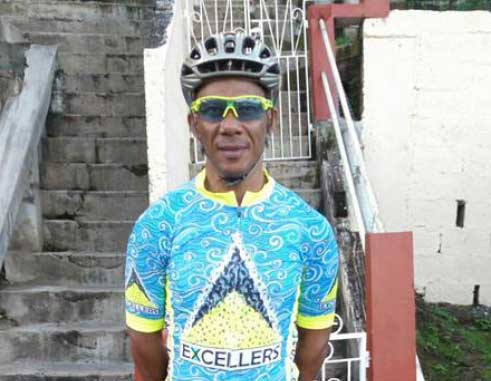 TODAY’S FITC seemingly has a love for all things round because he leads a double life, both of them involving riding on wheels.

Winston Williams can be seen daily operating his minibus along the La Clery route but while he spends his days driving on four wheels, his other life finds him hanging up his driver’s hat and strapping on his cycling helmet to zoom around on two wheels.

Williams has made a name for himself in the world of cycling and is nothing short of proud of his many achievements.

He also oozes passion for the sport and is often heard speaking about it, posting and promoting upcoming events and achievements on social media, even going as far as sticking photos of himself in action to the roof of his minivan.

Although he is a man of few words, there was no doubt during his interview with The VOICE that Williams has his head firmly in the game and forever on the prize.

He has made it clear that although being a minibus operator is his livelihood, being a cyclist is his baby and he has no plans on hanging his cycling gloves up any time soon.

The VOICE: Not many people know you are a cyclist who has flown the Lucian flag all over the world. Tell me about your cycling career.

Williams: I have for 17 years been representing St. Lucia regionally and internationally in championship races like the Pan American Games, CAC Games, CCC, OECS, Trophy de Caraibe and other invitational races.

The VOICE: When did you realise your passion for the sport?

Williams: At the age of 15, I joined the Soufriere Cycling Club were I was trained and mentored to become a champion.

The VOICE: You have done so much for your island. Yet, so little is known about you. How come?

Williams: In St. Lucia, the ones in charge only promote the ones closer to them. For example, in 2015, I was the best candidate for Cyclist of the Year, but was later told by members of the St. Lucia Cycling Association that they forgot to nominate me. So that year, there was no Cyclist of the Year and this has happened on more than one occasion.

The VOICE: Cycling is seemingly a very underrated sport in St. Lucia. Why do you think this is?

Williams: I think that’s the case because it’s an expensive and time-consuming sport. Also, there is not enough money being spent to promote it in St. Lucia.

The VOICE: What can cycling as a sport do for St. Lucia, and what do you think needs to be done to get it more recognition?

Williams: Cycling can make you an ambassador for St. Lucia because you get to travel a lot and, in turn, you get to meet new people in the sector and do some real networking to push yourself forward. Two things that can be done to give it more recognition are to open more clubs and get more sponsorship to help push the sport.

The VOICE: Have you ever made any attempt to get the sport in the spotlight? If so, what were the results?

Williams: I formed a club named Excellers Cycling Club in 2011. To date, I have trained boys who have represented St. Lucia with the national team overseas. But I have always had one major problem — not getting enough help to keep going at a higher level.

The VOICE: Finally, would you encourage the youth to take up this sport as a career. If so, why?

Williams: Yes, definitely, because it’s a good way to help young boy and girls to get off the streets and become involved in something that they could focus on. It can help them be more disciplined and, overall, they would be a lot more fit and healthy.