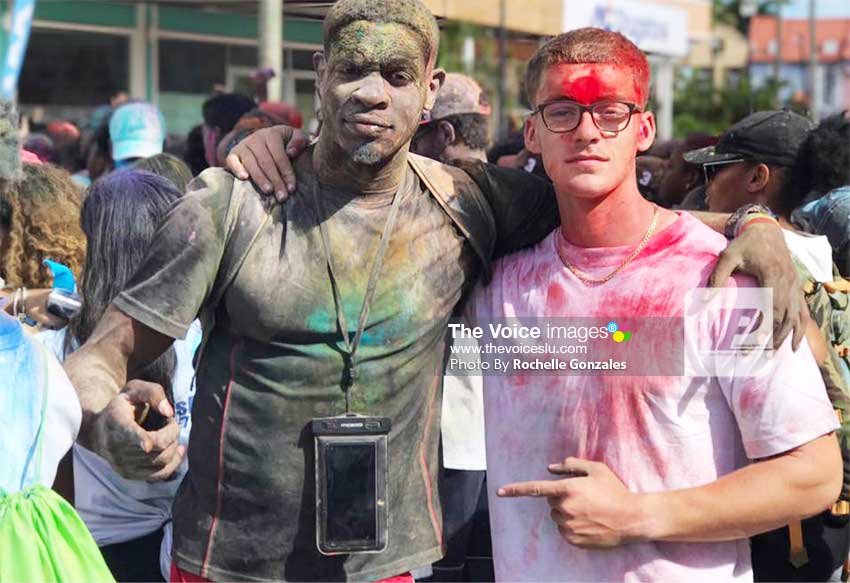 TYPICALLY, when you hear “White Chocolate”, you think of a tasty Cadbury’s treat, but these days, if you hear that name, you immediately smile and think of my FITC.

Josh Butler is his real name, and the nickname, you will find, is perfectly fitting, because not only is he good-looking and physically fit, but he also has a waist like a snake, knows how to use it and is nowhere near shy. Did I mention that he’s white?

Butler has been the highlight of local fètes all over, especially when music from the Dennery Segment is played — this is when the dancer in him breaks free.

Butler describes himself as an “anti-stoosh” extrovert who loves going out and interacting with people.

Originally from Hampshire, England, Butler is currently employed at a local hotel as an activities coordinator for the past eight months.

In between fits of laughter of his wit and charm, and after getting over the shock of the way his personality has adapted to island life, here is what he had to say.

The VOICE: You have made a name for yourself (literally) for being a white guy with the waist of a black guy. Where, when and how did you learn to dance like that?

Butler: The big secret is that this isn’t my first time on the island. I’ve always been a quick learner and having been here four times as a visitor, I’ve picked up different parts of the culture. Each year I came, I saw something new, something crazier. The first year, I was first introduced to whining, the second year was the Dennery Segment and Soca etc. As soon as I reached St. Lucia, I fell in love. I would come to St. Lucia and ask people for all the songs, go home and play them in my car — even when my friends back home disapproved, I kept listening. This eventually helped me to learn the words to the songs. But the dancing side of it, I think I’ve always had it; it took some practice to get to how I am now but I always had the base layer to dance.

The VOICE: You’ve also developed a huge following of late. What do you think of the attention?

Butler: Honestly, I like the attention. It’s always been in me to be an entertainer so when I see people enjoying my dancing, it gives me a sense or reward. Attention isn’t always great, though. I’ve had my fair share of bad attention since I’ve been here but I chose to ignore it and it has been massively outweighed by positive attention and good vibes. The majority of people that I have met have been incredibly supportive, giving me endless opportunities and good advice. But being an extrovert, I love the attention.

The VOICE: What is it about the music that drives you?

Butler: I honestly don’t know what it is. You have to experience a real crazy Dennery Segment in a fète where everyone is just getting on bad to fully understand the vibe of the music. The “riddim” of the songs and also some of the lyrics just make you feel a kinda way that you want to throw all good behaviour out of the window. I could have not slept or ate for 2 days and about to pass out on the floor, so long as Dennery Segment plays, my body will find the energy to dance and go crazy. There have been several times that I’ve been at a fète and I just wanted to go home, but as soon as “kuduro” plays I’m in the middle causing a scene.

The VOICE: What do you think of the common saying that white people can’t dance?

Butler: I actually agree with that statement. Surprising? Maybe, but honestly the majority of white people cannot dance and, of course, I actually have that to thank for the attention I get. If all white people could whine and go down and make their bumpers catch on fire and be firefighters, I would just be a next fire fighter, and what’s the fun in that?

The VOICE: I think it’s safe to say that you qualify as an honorary Lucian. But with that said, what else have you learned to do while here?

Butler: All that’s left is to apply for my passport; the easy way is to get a wife. So, any takers? (laughs)
I have actually learned a bit of patois while being on island, as I’m a quick learner but the majority I have learned is either song lyrics or inappropriate words. This is going to be an embarrassing one which I’m ashamed about, but I’ve actually learned how to iron my own clothes. I know, I know, it sounds bad but my grandma loves to iron, don’t ask me why but there you go. So I learned how to iron my own clothes

The VOICE: Would you ever consider living here for good?

Butler: I actually have to go home in August to go to school, but I will be back throughout those three years and the plan is to then move back permanently. I feel at home here way too much to let that slip. I would definitely say St. Lucia is my first home and England is my second.