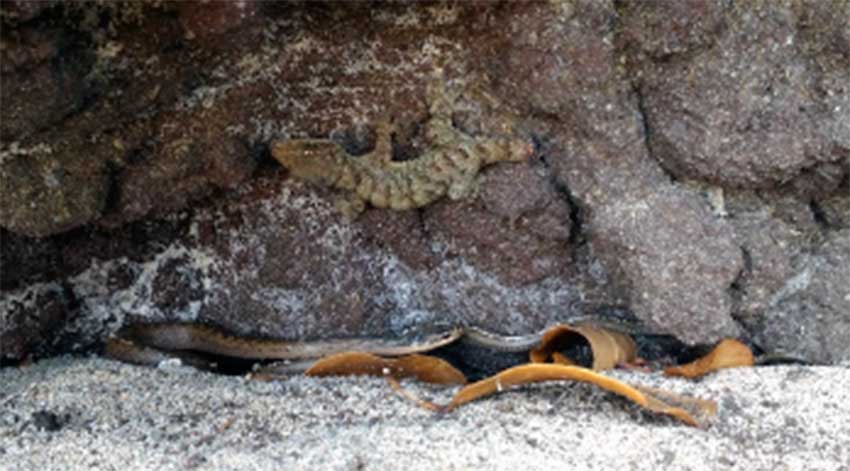 ON an island which relaxes the mind with birds chirping, anoles and whiptails scurrying over leaf litter; Maria Islands Nature Reserve is home to five endemic reptiles, including the elusive Saint Lucia Racer.

On March 28, 2017, the weather was a bit overcast and sunny with heavy showers in the wee hours of the morning. The task at hand was biosecurity monitoring on Maria Major because it’s absolutely critical that we keep those non-native predators off the island!

A three-person team sets out to bait 12 stations and carry out surveillance for those predators by walking transect lines. Transects lines are done by walking from station to station and keeping an eye out for predators and reptiles within a 5 feet radius; the findings are recorded on animal observation data sheets.

On board that day were Lanson Paul and Saphira Hunt of the Saint Lucia National Trust (SLNT) along with Mathurin James of the Department of Forestry (DOF). One man short, the team split into two, leaving me dubbed (not by me!) Mademoiselle Snake Whisperer, to work the tour trail and bait stations in the surrounding areas while Mathurin and Lanson set out to bait the farther end of the island.

We use bait in stations (boxes that encourage rats to enter if rats are present – which they aren’t, touch wood) as a way of detecting any invasions. Maria Major had a quietness I couldn’t place (maybe because I was alone in this tranquil place). There was something calming about being on the island at 9:00 a.m. working alone. 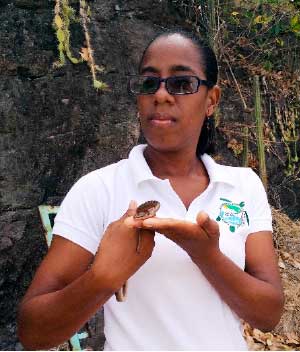 I carried on with my task and walking transects. Having done stations #6 and #3, I walked my next transect to station #1, keeping my eyes peeled to the ground for any Saint Lucia Whiptail sightings, as I was in the area where they are most abundant on the tour trail.

With bait station #1 now in sight, I did a final check before ending the transect and there I spotted a greyish-coloured Saint Lucia Racer scurrying away from me. Down on my knees, I crawled beneath the hedge along the trail with hope of capturing my elusive friend. They are gentle reptiles that don’t bite and are not poisonous, so I wasn’t worried.

True to its name, the Racer got away from me tropsvit, speeding under the leaf litter and out of sight. Being the world’s rarest snake, it’s understandable they’re nervous. Having remained quiet for 10 minutes, I was hoping my friend would resurface. But, with no luck, I continued with servicing station #1.

Under the canopy, I went to access the remaining bait stations. With station #2 done, it was onwards to #4. On that transect, I spotted five Saint Lucia Anoles and was about to record them on the data sheet and Voila! Another Racer racing by, this one brownish in colour and bigger than the first.

The kit I was carrying went crashing to the ground as I gave chase through a jungle of vines, slippery leaf litter and small trees. The Racer again was victorious in this 100-metre dash. Still I was elated two Racers – the world’s rarest snakes – in a mere 10 minutes. Talk about luck!

Added to these two sightings this year, another Racer was caught on March 16, 2017. Lanson Paul, playing the role of tour guide for a two-person tour to the island, returned to Maria Major’s beach after the hike. On the beach, they found Richie Robert, the boatman, resting in one of the small caves by the shore. A plump rock gecko suddenly raced past Richie, sporting the stub of a freshly-missing tail, and a juvenile Racer hot in pursuit.

Three Racer sightings in two weeks; what a treat! They say a black cat crossing your path is good luck but give me a Racer any day.