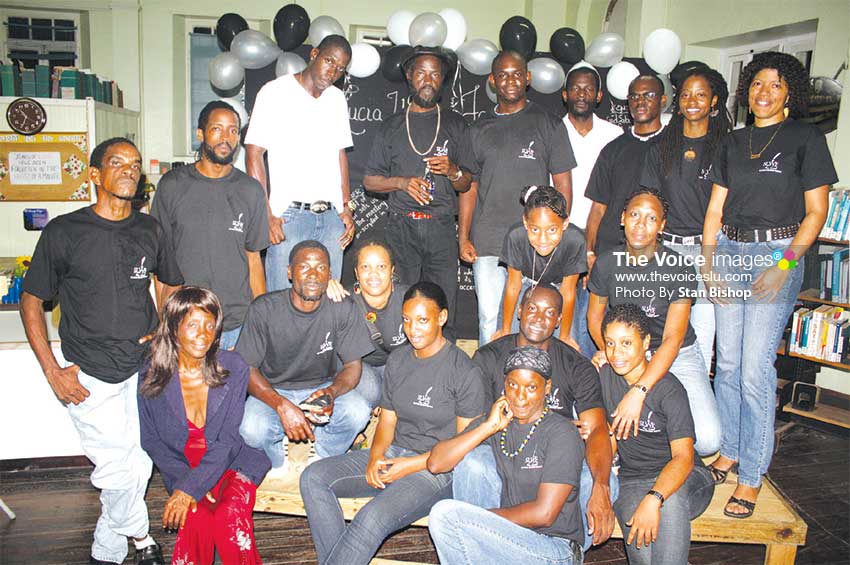 MEMBERS of the St. Lucia Writers Forum (SLWF) are wearing wider smiles these days and deservingly so. Throughout trials and time, they have managed to remain steadfast in keeping the group together and prove that writers do matter in a society where avid reading is still a challenge. More importantly, though, the Forum has managed to keep their words together.

Last Tuesday evening, the Forum released its new 88-page book, “Opus Spectrum”, its fourth collection of poems in two years. The book, subtitled “Poetic Journeys”, is the second volume in its collection and contains themes of love, hate, war, abuse, nature and day-to-day affairs. The first collection, “The Initiation”, was published in 2015. Two of the Forum’s other three anthologies were written in kwéyòl.

Former president of the Forum, Kensley Charlemagne, said the group had been discussing the project for quite a while and figured it would add some amount of prestige to the Forum. He said he wanted to ensure that the writers’ works were published in order to get their work to the general audience.

On paper, the Forum currently has a membership of twenty. However, about a dozen members attend the regular meetings. The group was formed in mid-1998 by a group of published and unpublished writers who all had a common goal: promoting Saint Lucia’s rich cultural talents.

Headquartered at Central Library in Castries, members met every Tuesday (holidays excluded) from 6:00 p.m.to read, share, offer critique and develop their writing talents. At the time, it was one of the trailblazing groups that created a conscious revolution on the creative front.

Many members, mostly poets, have performed their works on stages in Saint Lucia and abroad and have won several awards, including at the now-defunct M&C Fine Arts Awards. Some went on perform at Headphunk and the PonmDamou Poetry Slam. In 2010, the Forum was honoured the Division of Library Services for its contribution to the arts and providing a platform for artists.

Over the years, the Forum has served as a home for budding and experienced writers, a place where they often bounced ideas off each other to come up with some of the best poems you’ll ever read. However, the Forum also went through a series of transformation that saw members enter and leave. Nevertheless, none can say that the group did not influence them in a meaningful way. One such writer is Charlemagne, who took up the challenge nearly five years ago to ensure that the group remained both alive and relevant.

“One of the things I had feared was that we would not have the suitable people to take over,” Charlemagne said. “For me, it was very important to have people who were young, energized and had the passion to be able to take the group forward.”

Charlemagne said the Forum plans to have chapters – no pun intended – in Soufriere, Gros Islet and other districts to facilitate new members.

Perlina Murray was elected president of the Forum recently and said she wants to see the group raise its bar even higher. While she commended the writers for their efforts thus far, she believes that they need to tap into other available opportunities to bring their works to larger audiences.

“We want the writers to let Saint Lucians know that we have a gift in terms of the literary arts and our voices should be heard,” she said. “Maybe one day one of us might be the next Derek Walcott by winning a Nobel Prize for Literature and keeping his legacy alive.”

In fact, the writers have been visiting various schools during Reading Month to present their work to students in an effort to cultivate in them a passion for writing.

Charlemagne applauded Murray’s dynamism, acknowledging that in order to attract new members, the Forum needed to become an even greater version of its older self. By bringing in new blood and ideas, he believes the Forum would have had the rebirth it desperately needed.

“I’m pleased that Perlina stepped up. She seems to be very dedicated, sociable and handling the group, which is very important. Good dynamics are very important, too, and I think (the lack of it was) one of the things that have affected the group through the years. Sometimes, we go down to as little as two group members,” Charlemagne explained.

Another member, GyanchandRayman, joined the Forum merely two weeks after it was formed. A published writer who specializes in prose, Rayman said the group’s publications thus far were remarkable achievements which prove that determination trumps despair. Things can only get better if the Forum borrows elements of its former life.

“People are passionate about their writing,” Rayman said. “However, they’re crying out for guidance. They come (to the group), produce their work which we critique. But we need to do this more often and have proper scheduled guidance, something more structured. Apart from the promotion of that kind of work and the quest for better writing skills, we want to sell.”

While most of the members specialize in poetry, he said one of the group’s objectives is to incorporate all art forms – such as painting, prose, drama and music – into a more formidable product so as to showcase the group’s varied strengths.

To purchase a copy of “Opus Spectrum” and other Forum collections, contact group members or Saint Lucia Books.

The Forum meets every Tuesday from 6:00 p.m. at Central Library and has an open door policy for all writers, novice or seasoned.