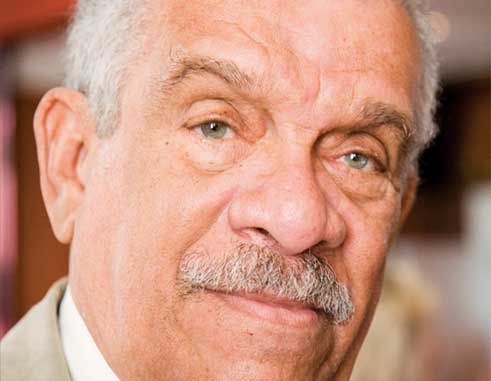 SIR Derek Alton Walcott whose poetry took him to the top of the literature world winning him a Nobel Laureate and elevating himself to the status of national hero and icon, died yesterday at the age of 87.

An announcement from his family said he died peacefully at his home in Cap Estate “and will be greatly missed by his family and friends.”

Although Walcott earned most of his fame for his poetry, he was more than a poet, being an accomplished playwright and artist as well.

A sometimes controversial figure, Walcott on occasions attracted criticism at home and abroad, but no one was ever able to deny his literary genius. He frequently criticized the lack of commitment from administrations in his homeland towards the arts and publicly lent his voice and support to public concerns and protests about issues that impinged on the patrimony of St Lucia which threatened sacred places.

Walcott became an intrinsic part of the history of St Lucia when in 1992 he captured the Nobel Prize. What made the occasion particular telling was that just 13 years earlier St Lucia had shaken up the world with a first Nobel Prize this time in Economics awarded to Sir Arthur Lewis. All of a sudden St Lucia became the only small country anywhere in the world with two Nobel Laureates, a feat that remains unparalleled to this day.

Adding to the drama at the time was the revelation that Lewis and Walcott shared the same birth date, January 23. Year after year the island pays tribute to two of its favourite sons with a series of activities around their birth date in their honour. Before 1992 and since, Walcott accumulated a number of awards and honours for his work including the knighthood from his homeland.

Within hours of the announcement of his death yesterday the tributes began to pour in. The St Lucia givernment ordered that all flags be flown at half mast until Tuesday.

Prime Minister of Saint Lucia expressed deepest condolences to the Walcott family, friends and members of the literary fraternity. He said: “ When everyone speaks about excellence and describes Saint Lucia with any form of superlative, clearly the two names that stand tall in Saint Lucia’s history (are those) of Sir Arthur Lewis and Sir Derek Walcott. It has become customary for us to see Sir Derek and know that he was there all the time. He made himself so available and participated in so many national events here in Saint Lucia and continued to fly the flag very high”.

“We can now look back on his achievements which are so incredible,” said the Prime Minister. “He has made all Saint Lucians very proud and Caribbean people very proud.”

The National Cultural Foundation, the island’s leading cultural agency said: “Our sympathies extend to Saint Lucia as a nation, who without doubt are proud and honoured to call him a true son of Saint Lucia. He was very vocal about the island’s culture and heritage and its preservation and his love for Saint Lucia and the Caribbean was evident in his numerous mentions of ‘home’ in his work.

Leader of the Opposition Philip Pierre said it was an understatement to say Sir Derek was a genius of all times, adding: “He ranks in the literary world of William Shakespeare, Longfellow, V.S. Naipaul and others of that ilk”. Pierre said Walcott had blazed the trail with his poetry and writings – always remembering the country of his birth Saint Lucia from ‘Return to D’Ennery Rain’ to ‘A City’s Death By Fire” – Saint Lucia was his oasis, his playground from where he would inform the world of his native island, introducing the local patois in his poetry, proud of his heritage and his country”

Said Pierre: “This greatest living writer, is gone but thankfully his writing will remain for the world to enjoy and share with generations still unborn”.

The Walcott family has announced that the funeral will be held in Saint Lucia and details will be announced shortly.