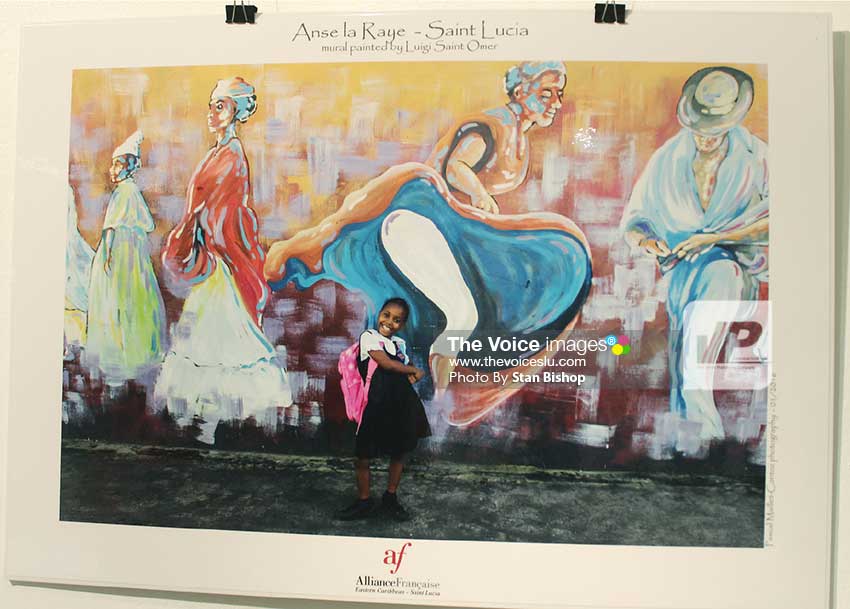 THERE should be no excuse for not paying a visit to the Alliance Francaise for the “Murals of Saint Lucia” exhibition that opens to the public from today and runs until February 28. The fact that it pays homage to the rich talent of local photographers and painters – and that it’s free – invalidates any excuse.

The official opening was held on Thursday evening where Pascal Maillet-Contoz, photographer of the murals displayed, told The VOICE that the photographs are among some of the best things he has done since arriving in Saint Lucia from France last September to begin a two-year stint at Alliance Francaise.

“I feel the energy from those murals and when I met the painters, I feel the same energy. For me, it’s a mix of light, shapes, materials and colours. So when Evelyne (Gasse) asked me to do those pictures, it was a real challenge,” Maillet-Contoz said.

Maillet-Contoz said that while he knew where most of the murals were and had photographed some of them, the work continues as he aims the find the rest and photograph them.

He recalled the “strange meeting” with the young girl captured in a mural painted in Anse la Raye by Luigi St. Omer. He said that while photographing the mural, school had just dismissed and as the students were passing by, they asked whether he could take photos of them next to the mural. Annabella’s congeniality, he said, worked well with the backdrop and inclusion in the exhibition.

“The choice of photos was not easy because there are so many. But there are a few of them that I love because there are human beings in them. There is one with little Annabella in Anse la Raye. I met her grandmother a few days ago to ask if it was okay that the photo be part of the exhibition,” Maiilet-Contoz said.

The Frenchman said he is a globetrotter and has been to countries such as Tanzania, Madagascar, Vietnam and Poland photographing people, including them extracting precious stones from mines, which he later displayed. He said the experiences reaffirm his faith in life and art.

“In my job, what I like is meeting people to share, speak, feel and understand how things happen and how life is,” Maillet-Contoz explained. “That’s my aim. I like to photograph people at work: the chocolate maker, the jeweller, the one cutting the stones and the dairyman. I like to show what they do because what they do is what they are.”

Maillet-Contoz said he has since developed a warm friendship with the local painters and artists, some of whom brought him to the locations where some of the murals were. The murals, too, he said, have something that Saint Lucians should appreciate.

“What I like about this is that the history of Saint Lucia is in those murals,” he said.

Director of Alliance Francaise, Evelyne Gasse, who asked Maillet-Contoz to photograph the murals as part of the organization’s contribution towards creating more awareness of the arts, said that while the arts have not been getting the level of recognition they deserve, the time has come to change that anomaly.

“Some people can say that here in Saint Lucia there is no museum, no real art galleries, no specific places to show the identity of the island and its inhabitants,” Gasse said. “Perhaps, it’s a shame but, perhaps, it’s also a chance because, obliges us to take the time for discovery, the time to speak, the time to watch, the time to share and the time to open your heart.”