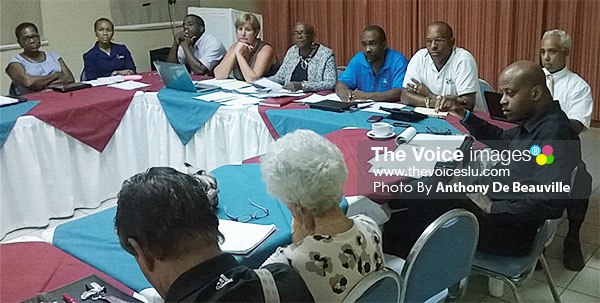 I always loved this fairytale when I was growing up, “The Emperor’s New Clothes.” It’s such a wonderful metaphor for situations in life in which one person sees things one way and another person doesn’t see it at all. But even before I commence what I am about to write about our national sports federations and their respective structures, allow me to commend Fair Helen’s sons and daughters in sports.

It is amazing how quickly time passes by. We have just ushered in a new year and I hope that those young and aspiring sportsmen and sportswomen who brought smiles to our faces and joy to our hearts will continue to strive for more podium calls, and for those who lost their momentum along the way to find it again. The time is now to refocus, set goals and be counted.

In 2016, it was mixed fortunes for many of our national sporting federations compared to performances in 1987 and again in 2014 (you remember, right?). Those were two outstanding years. Since then, Saint Lucia’s performances at the sub-regional, regional and international levels have remained questionable.

Thumbs up to the National cricketers for retaining the Windward Islands Under-15 title; they have been the most consistent national team in and out of Saint Lucia for the last five years.

But if we are serious about sports and if Saint Lucia’s sportsmen and sportswomen are to take their rightful places on the world stage at a competitive and consistent level, we need to revisit the organizational structure of our 25 national sports federations (NSFs), specifically the way in which they operate.

The Saint Lucia Olympic Committee (SLOC), under the leadership of Fortuna Belrose, will have to draw the line and ensure these NSFs work in the overall interest of their members. For too long now some NSFs have been hiding under the SLOC banner while failing to show slate in organizing national sporting events. One reason for this is the structure of these organizations. The human skeletal structure determines what shape we are in, likewise a sports organization. Most of us don’t spend much time thinking about our skeletal structure until something breaks; likewise these federations.

Adding insult to injury, some failed people at the helm of these federations refuse to step down and hand over the leadership to those who are more capable of taking the federation and its members to the next level by giving the affiliates a sense of ownership, a sense of hope and a sense of wanting to represent Saint Lucia with honour and pride.

We talk about a sports culture that used to be a big thing of the past. Our new sports culture is simple: cling on to power, which says a great deal about our functioning and leadership.

In my years in sports administration and looking from the outside, my organization was one to be envious of. During my stint with my colleagues, we worked in the interest of our members. Sometimes it makes sense having several people share the leadership position. But this can be confusing as well as at the end of the day to get a decision which will benefit the young and aspiring sportsmen and sportswomen in the long run is like swimming through peanut butter. My reason for saying so is that most of the times there are a number of people putting themselves up for positions but when they get elected they are not willing to function. Do they seek these positions just for the purposes of prestige?

At present, we have a few federations with names — national this and national that — which have been leaderless for some time, for reasons which remain a mystery. We have incoming presidents who inherit problems left behind because it became evident that some of the problems stemmed from the way the federations were structured. There are cases in which executive members turn against each other, policies are not consistently applied, power-plays between the top brass still remain a regular occurrence and the resulting dysfunction hampering the effectiveness and the way forward for sports.

Recently, Saint Lucia was represented at the 13th FINA World Short Course (25 Metre) Swimming Championships in Windsor, Canada. Did you by chance hear about it? I guess not. Interestingly, there was nothing coming from the swimming association as to the individuals representing Saint Lucia far less the event they were competing in. The public relations of some of these NSFs leaves a lot to be desired and I believe that’s why we are still where we are today in our sports development. Some national federation representatives leave the island under the cover of darkness to go out and compete without the public having prior knowledge of their departure and return to the island.

Ask any of the NSFs whether they have a mission, vision and strategy for the organization and please don’t be surprised at the answer you get. I guess you will hear things like, “Well, we are here for the young people and their development.” That calls for a grin, not even a smile.

It was interesting to hear the newly-elected president of the Saint Lucia Athletics Association, Andrew Magloire, saying that his executive needs to reorganize the SLAA constitution because it is badly written and difficult to understand. Magloire further said: “We need to get that constitution reorganized so that our affiliates can understand it; most of them don’t understand it and the language is terrible.”

At least Magloire was honest. What about the others who are in charge of running national federations without a properly-written constitution? There are also some NSFs with only the president running the show; the president is chief cook and bottle washer. There is no accountability. Who do they account to? Not me, for sure.

Finally, in the interest of development, “resistance” is a word I use to describe what a person is doing if he/she doesn’t have things their way, especially those at the helm. They get frustrated, even angry, when others don’t embrace their way of doing things. Automatically, the thinking is that others are not cooperative, so the word is out that “They have their own agenda” or “They aren’t team players”. In 2017, it’s time to make that change, start that revolution by thinking positive not for me, but for the young and aspiring sportsmen and sportswomen. Give them that chance to play and excel in their preferred sport.