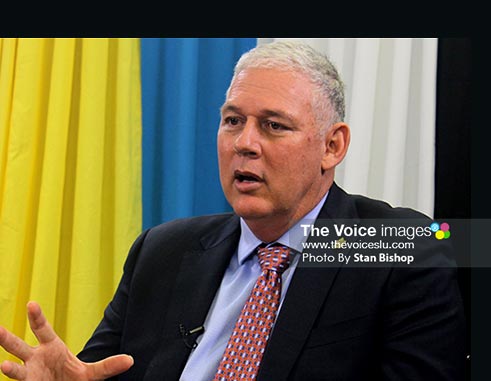 PRIME Minister Allen Chastanet held his first press conference of the year on Thursday evening, addressing a wide range of issues. During the 90-minute briefing held at GIS Studios and carried live on NTN, Chastanet fielded questions from the media, including many related to the Citizenship by Investment Programme (CIP) and the Desert Star Holdings Ltd. (DSH) project.

Last Sunday, CBS programme, “60 Minutes”, featured Saint Lucia, St. Kitts and Nevis and Antigua and Barbuda in a report entitled “Passports For Sale”, which addressed concerns about Citizenship by Investment Programmes (CIPs) implemented around the world.

The programme described the CIP as being a safe haven for criminals and the perfect way to sell passports and encourage public corruption. Chastanet defended Saint Lucia’s programme, saying the programme was a very complicated and competitive one. He said Canada, the United States and the United Kingdom has almost similar programmes that might also have issues.

“What’s the difference between them going after the best athletes, the richest people and the brightest people? Is it not to make a financial contribution to their countries? The critical thing here is the scrutiny of people so that we do not allow despots to come into our country. So far, that’s not happened,” Chastanet explained.

The government announced recently that the qualifying contribution an applicant in the CIP needs to make to gain Saint Lucian citizenship which previously range from US$200,000 had been reduced to US$100,000, a move that sparked outrage from the opposition.

During a press conference on Thursday morning, the SLP accused the government of selling Saint Lucia’s image cheaply by diminishing the original intent of attracting high-end investors to the programme.

“We boast that we are selling a lifestyle, that Saint Lucia is premium, that we are not cheap and a free-for-all. Yet the government proceeds to remove the one regulation that sought more than any other to restrict the CIP to high net worth individuals,” Castries South MP, Dr. Ernest Hilaire, said. “Saint Lucia has become a cow which can be milked by any person with $100,000. Let us forget about high net worth, it is a programme for no worth.”

Hilaire, who chaired the inaugural CIP Board before resigning to contest the June 6, 2016 general elections, described the government’s amendment of key CIP regulations as “pure madness” and called for an immediate end to the programme.

On Thursday evening, Chastanet responded to the opposition’s concerns, saying changes had to be made to the programme to make it more competitive, especially against its regional partners.

“I hear this idea that we’re selling ourselves cheaply and undermining our market value,” Chastanet said. “But the fact is that when people are buying into a citizenship by investment programme, they’re doing so because it has a value. Unfortunately, and we don’t like to hear that, the value isn’t necessarily the country. The value lies in the access that citizenship gives you, how many places you can go to visa-free.”

Chastanet said government aims to keep the controversial programme “very transparent”, adding that CIP funds will go into a sovereign fund. Government, he said, will announce shortly how that sovereign fund will be set up and regulated and who will be managing it.

“I can assure you that it will not be me or anyone in government,” Chastanet said. “It will be completely independent but will be assets of the State. Once the monies go into the sovereign fund, that fund can then lend monies to projects in Saint Lucia, whether they are tourism projects or otherwise. It can also be used to buy bonds.”

The Prime Minister said government was confident in the manner in which it is managing the CIP thus far, adding that government aims to introduce a residency programme soon.

Concerns persist about the due diligence aspect of the programme and the ’60 Minutes’ programme highlighted instances where criminals were reportedly accepted in similar programmes elsewhere in the region. However, Chastanet said every effort is being made to safeguard the island’s security and reputation, adding that due to Saint Lucia’s close proximity to major international gateways, he understood the concerns those nations would have as far as security is concerned.

“The most important part of the CIP is the background check and that has remained very much in place. We’re going to be as stringent as possible. For example, we’ve had some people who have been declined. (They) are entitled to appeal. Under the current legislation, the person to whom they appeal is the minister, (which) I felt is wrong,” Chastanet explained.

He continued: “So I’ve put together a panel of three people to be able to make that assessment independently. Further, we go through the Regional Security System (RSS) to determine the veracity (of these applicants). So we’re taking the due diligence and background checks extremely seriously.”

With respect to the DSH project, Chastanet said that while he expects the opposition to raise valid concerns about the project, it should be mindful that when in office it seemed willing to grant potential investors similar incentives to attract investments.