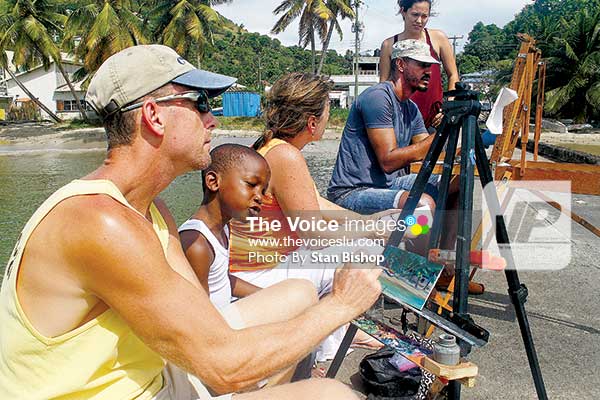 Nuggets of Excellence Continue To Emerge.

AS this year’s Nobel Laureate Festival winds down, organizers are placing increased emphasis or peculiar attributes serve to showcase the island’s talents, resolve and spirit.

Over the past few days, audiences were treated to several bouts of artistic expressions that define the Saint Lucian identity.

On Wednesday evening, the Alliance Francaise and Travis Weekes Project hosted a captivating performance of an excerpt from Oscar Wilde’s play, “Salomé”. The play is based on the Biblical story of its main character, Salomé, who, like her mother, Herodias, begs her stepfather, Herod Antipas, for the head of John the Baptist in exchange for her dancing the dance of the seven veils.

The production features a mix of French and Saint Lucian actors who used French – the original version of the play – to weave the story of a man torn between his fantasies and moral conscience.

Following the performance, a roundtable discussion on the importance of the creole language – and French, to some extent – followed. The panelists included Governor General Dame PearletteLouisy, Travis Weekes, Paul Turmel-John and moderator Stephane Dovert. All agreed that the creole language is still not getting its due respect and that it should become part of the school curriculum.

On Saturday, the three-day “Paint The Village” activity ended in Laborie with nearly a dozen artists converging on the Laborie jetty to paint portraits of the scenic southern community.

Organized by Labowi Promotions and artist Jonathan Gladding, the event aimed to promote visual arts in the community and contribute to the overall vision of a community where arts and culture play a key role in socio-economic development.

So serious is the art movement that the artists have painted on 5-feet by 3-feet letters cut out from plywood spelling the word “LABORIE” – not unlike the Hollywood sign in California – which they hope to place in a prime location shortly.

The festival took a dramatic turn yet again on Saturday and Sunday evening when Gemstones Theatre Productions and Take Over Tent staged two productions in one: “Twisters”, a play written and directed by Hayden Forde, that deals with familial issues; and “Folklypso”, featuring performances from calypsonians Lady Leen, Black Pearl, TK the Boss and Herb Black, with back-up music by folk band, Manmay Creole. If you missed this production – keep that shame a secret – you’ll get a chance to redeem yourself when the serious comedy play is staged later this year.