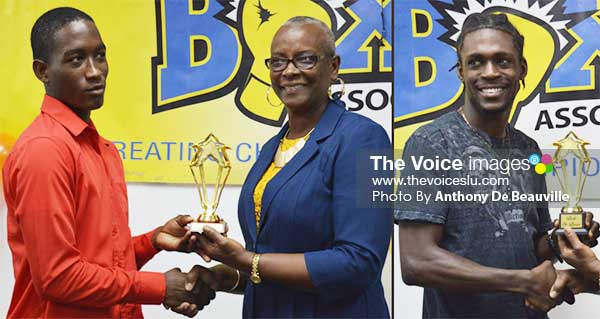 NATHAN Ferrari and Lyndell Marcellin were declared Junior and senior “Boxers of the Year” by the The Saint Lucia Boxing Association (SLBA) at its annual awards ceremony at AubergeSeraphine Hotel last Thursday.

At the Caribbean Development Boxing tournament in Barbados, he captured silver, and did likewise at the Martinique Invitational. He also won silver in two separate invitational bouts in Guadeloupe.

Marcellin got the nod in the Senior category ahead of Arthur Langellier. Marcellin won gold medals at the Creole Championship in Cayenne, the Guyana Invitational, the Dominica Invitational, the Brian Lara showcase in Trinidad and Tobago and silver at the Caribbean Development Boxing championship in Barbados. He also participated in two Olympic qualifiers in Argentina and Azerbaijan.

Head coach Conrad Frederick was presented with a token of appreciation for his outstanding contribution and success throughout 2016. Omar Christopher captured the Award for Best Youth Boxer while a combined group 25 male and female students currently on the boxing programme representing Bocage, Entrepot, Leon Hess Comprehensive, Corinth Secondary and the Vigie Boxing Gym were presented with certificates.