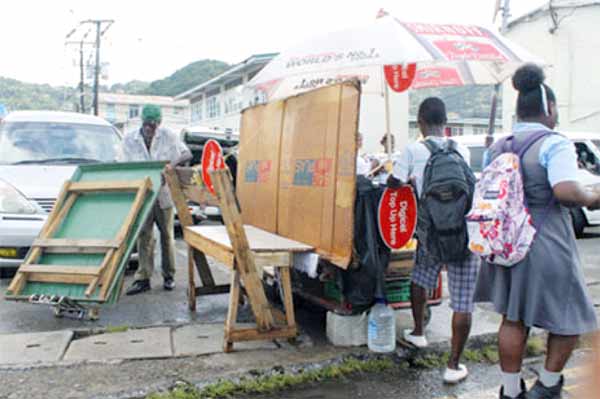 THERE must be some level of respect for customers on the part of business entities out to make a dollar. However, with business becoming increasingly competitive, it seems that some are willing to sacrifice respect at the altar of the almighty dollar without any misgivings. The situation is so bad that even customers are turning a blind eye to some of the problems.

Take what happens in Castries, for example, where some business-places offering food and drink seem to care less about the health of their customers than they do about the money they wish to rake in. In some instances, food is being sold right over clogged drains that contain the worst of the city’s sediments.

Some vendors even think it justifiable to erect huge imposing structures across sidewalks in the name of earning a daily bread. Even worse, they often contend that the few dollars they pay the Castries Constituency Council (CCC) exempt them from showing any consideration for pedestrians.

The unsightly practice of grown men and women relieving themselves just about anywhere in the city has been a major concern for many, including visitors to our shores who later complain that Saint Lucia was not all beautiful as is being advertised. Even minibus drivers can be seen in broad daylight urinating near their bus stands in clear view of their passengers who have to trade cash with them. All this happens sometimes just feet away from a comfort station that charges as low as fifty cents to use!

On any given night, the city transforms into a seedy environment where even under-age drinking and other sordid activities occur within arm’s length of police officers assigned to ostensibly keep the peace. Drunkenness and some of the most despicable behaviours are displayed in such a wanton manner that those who revel in it seem to probably live for it.

This week, Castries Mayor, Peterson Francis, indicated that his office would be cracking down on some of the ills that pass for city pastimes, including littering, urinating, defecating and indecent exposure. As late as it already is to start addressing these issues that have plagued our city for years, we hope that that office can make some speedy progress in that regard because the current situation does not need lip service anymore. The city has had more than its fair share of disgrace.

In any event, there must be some level of pride in how we treat our country. Why should we have to be forced to treat our home with respect when others coming here view it from afar as paradise? If the manner in which we treat our country is any indication of how much we love it, then we need to rethink what patriotism is all about.

It’s time to clean up our act – not later, but now.