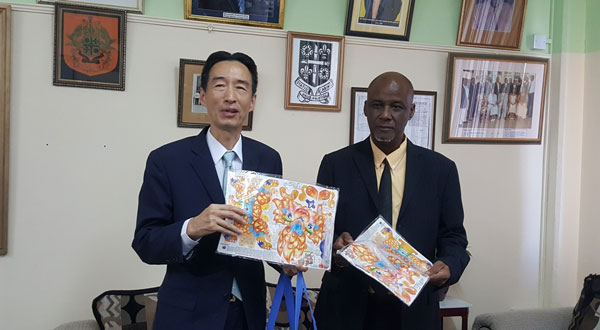 The Embassy of the Republic of China (Taiwan) donated $5,000 and 100 traditional Taiwanese unicorn lanterns to the Castries Constituency Council (CCC) last Monday for the upcoming annual Festival of Lights.

Speaking at a ceremony held at the CCC’s Peynier Street office, Taiwan’s Ambassador to Saint Lucia, Ray Mou, indicated that the contribution illustrated the longstanding friendship between the peoples of Taiwan and Saint Lucia.
The mythological creature, the unicorn, symbolizes good fortune in Chinese tradition, and the hope is that the lanterns will bring about success and prosperity to the people of Castries in the new year.

Ambassador Mou stated that Taipei City, the capital of Taiwan, and Castries used to be twin cities back in the 1990s. After many years, he intends to work with Mayor Peterson Francis to rekindle the twinning bond between the two capitals.

Mayor Francis thanked the Embassy for the generous support given to the Festival of Lights and praised Taiwan for its various support to Saint Lucia and to the city of Castries. He looked forward to establishing new ties with Taipei, especially in the area of cultural exchanges.