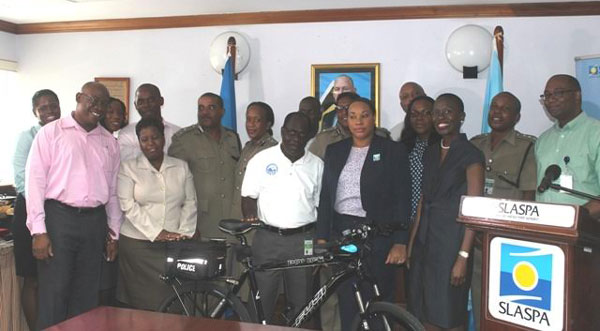 The initiative was part of SLASPA’s Community Outreach Programme and geared at making the city of Castries a safer place for all who visit work and recreate.

The bikes were donated at a ceremony at SLASPA’s headquarters where the Royal Saint Lucia Police Force was well represented by members of their senior management team, including Acting Commissioner of Police, Milton Desir, and Assistant Commissioners of Police, Frances Henry and Cruscita Pelius. Representatives of SLASPA’s Senior Management team were also in attendance.

The bicycles are equipped with specialized sirens, LED bike lights, signals, torchlights, safety helmets and a bicycle trunk bag. The bikes are expected to aid the officers in improving their ability to patrol the city circuit, neutralize any threats and protect all the citizenry and visitors.

Police Bicycle Patrol is a proven method of policing that allows the officers to connect and interact with the community as well as inspect areas where larger motor vehicles are not able to access.