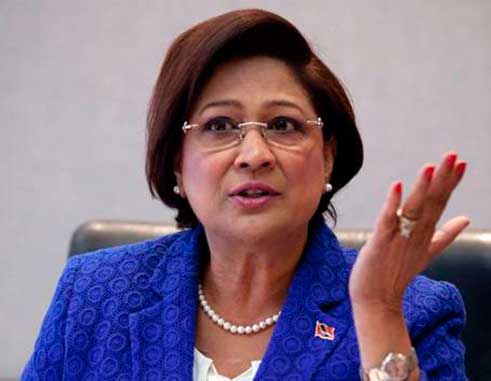 PORT OF SPAIN, Trinidad, Dec 9, CMC –Opposition Leader Kamla Persad-Bissessar was ejected from the Trinidad and Tobago Parliament on Friday after she failed to heed a ruling by the Speaker Bridgid Annisette-George on a motion of a matter of national importance.

The other opposition legislators walked out in solidarity with Persad-Bissessar, who had wanted the Parliament to debate the number of murders and missing people in the country “as a matter of urgent national interest”.

But after she made her initial request for the debate, the Speaker ruled that the matter did not qualify under Standing Orders and directed the former Prime Minister to using another avenue to have the matter debated.

Attorney General Faris Al-Rawi said the walkout by the opposition was strategic as Parliament is debating the Fair and Accurate Credit Transactions Act (FATCA) bill.

“The FACTA bill has to be passed and the opposition walked out again,” he said, noting that “if this legislation is not passed by both houses of parliament the effect will be the shutdown of the banking services in Trinidad and Tobago. The de-risking as has happened in Jamaica and Belize.

“This will result in the citizens of Trinidad and Tobago having no way to deal with their corresponding banking,” he said, noting that apart from a press release in September, the opposition has not put forward any position on the FACTA bill.

“The sole indication of the opposition position…is by a press release,” Al-Rawi added.

In September, the United States recommended that Trinidad and Tobago pass the FATCA by February next year, providing a five-month breathing space for the country.

US Ambassador John Estrada had initially indicated that the Keith Rowley administration had submitted a “detailed step-by-step plan” to the United States Government on how it intends to bring the FATCA agreement into force.

Estrada said that the plan had been submitted to the US Treasury.

“Let me start by saying we strongly recommend that Trinidad and Tobago pass legislation no later than February 2017, in order to carry out the commitments undertaken when the FATCA agreement was signed by our two countries, and in line with the implementation plan put forward by the government of Trinidad and Tobago,” Estrada said.

Al-Rawi told Parliament that the bill must have the support of the opposition in order to be passed.