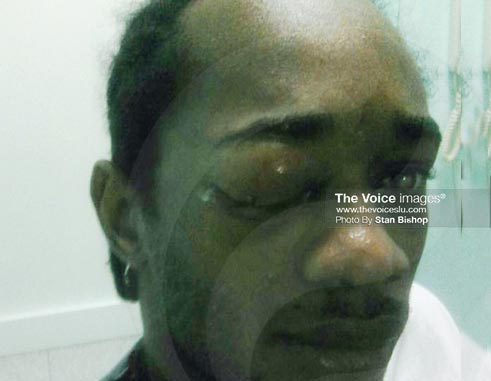 A Saint Lucian couple who left the island for Cuba in October to pursue medical treatment there now find themselves stranded and at their wits end.

Valence Emmanuel and Joanna Joseph’s saga began sometime last year after Emmanuel began experiencing a tingling sensation in his toes which eventually made its way up his legs. Soon after that, he became paralyzed.

Emmanuel’s vision became blurred and he suffered from acute headaches and other symptoms, including respiratory problems, resulting in him being rushed to Victoria Hospital where he was admitted to the Intensive Care Unit (ICU) and placed on a ventilator.

After staying there for some time, Emmanuel lost weight and fell into a coma. His eyes were also infected. Tests were conducted to determine what he was suffering from as he and his girlfriend were told that his condition was rare.

After it was determined that he was suffering from Guillain-Barre Syndrome, Joseph organized several activities such as barbecues to raise funds to finance the cost of his eye surgery after receiving a quote from a hospital in Cuba.

They left Saint Lucia for Cuba on October 16 with some money in hand and a promise from the Ministry of Health and another organization that they would receive additional funding for Emmanuel’s treatment. By the time they reached Cuba, the doctors there could not begin treating Emmanuel’s condition because the promised funding had not arrived.

Some of their funds were used to rent an apartment and purchase basic food items and Joseph soon found herself going back and forth to the Saint Lucian Embassy in Cuba to seek assistance. The promised funds arrived a week later and doctors proceeded to treat Emmanuel, informing the couple that he needed three surgeries instead of one because his eyes had worsened. That meant that the operating costs had doubled and they were short of EC$8,000 to complete the entire medical procedures.

Emmanuel’s right eye was eventually removed on November 10 after the couple paid for the initial surgery. The remaining procedures involve a cornea transplant and replacing the eye into the socket. Since then, the couple has been making requests for assistance via Facebook while updating friends and likely Good Samaritans about their ordeal.

Thus far, they have been able to raise about EC$4,000 through donations but still need another EC$5,000 to complete Emmanuel’s eye treatments so that they can return home.

“I have been in Cuba so long that it feels like I’m going crazy,” Joseph told The VOICE this week. “My mom has my children and now she has a family emergency and has to leave Saint Lucia. I’m really trying to stay strong.”

Close friend, Michelle Auguste, who has been keeping in contact with the couple, is appealing to anyone who can assist to do so. Anyone, she said, can fall victim to a similar situation as some empathy needs to be shown.

“There is a certain amount of inner joy and happiness that comes with doing something selfless for someone else in need,” Auguste told The VOICE yesterday. “You may not know Joanna or Valence but they are our brother and sister. If you do know them, then I’m sure you share my grief and pain for them.”

Auguste added: “These are the holidays and while we are spending them feeling jolly, they are spending the time in a hospital and spare room. I know they would give anything to come home right now but can’t because they have to finish what they started. This journey will not be complete and they can’t come home unless Valence’s surgeries are complete.”

Two years ago, Auguste’s husband, Glenn Samuel, made a similar appeal for financial assistance to offset his medical expenses associated with his medical condition, non-Hodgkin’s lymphoma (NHL), a cancer which starts in the lymphocytes, which form part of the immune system.

After several glands were formed about his body, including in his groin and neck areas, Samuel died from his ailment last year.

Anyone wishing to contribute to Emmanuel’s eye treatment can do so by making a direct deposit to Bank of Saint Lucia account #141090453 in the name of Joanna Joseph.