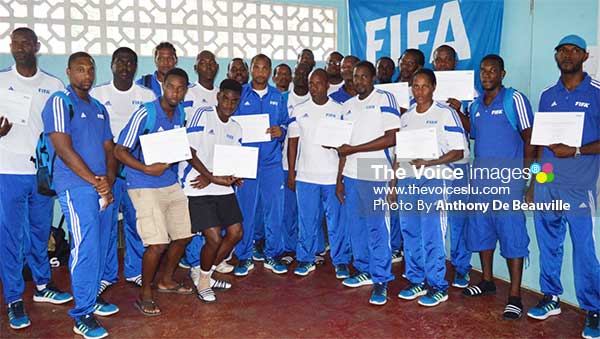 THE objective of any Saint Lucia Football Association/FIFA development activity is to ultimately improve the football experience of those who wish to play the game or train individuals who want to see an improvement in the game in Saint Lucia.

These were the words coming from FIFA Instructor Kim Poulson at the end of the five-day Basic Coaching Course for 33 prospective coaches from across the country. The course was organized by the SLFA in collaboration with world governing body FIFA and came to an end on Wednesday with the presentation of certificates to the participants at the EuralisBouty Players Pavillion at the Vigie Multi-Purpose Sports Complex.

Poulson told the coaches that one of the basic tendencies of organized games in the attack phase is to create space for active implementation of attacking moves.

“In the game, players need to think defensively when their team is in possession and, conversely, think offensively while defending. One of the key success factors of the game in offense and defense of some teams are critical moments of changing of possession,” Poulson said.

Poulson also touched on dribbling and controlling, saying dribbling is one of the most difficult skills to master in soccer but also the best to possess for the attacking moves. In football, he said, teammates typically attempt to drive the ball towards the opponent’s goal by way of ball control such as dribbling past or around opponents.

“When you master dribbling, you will be a handful for the opponents, something which may make them foul you as they try to stop your progress with tackles leading to a free kick and at times a penalty kick,” Poulson explained.

He added: “To play a good game, you must be proficient at passing. It may appear like an easy thing to do at first, and actually it is. What can make passing challenging is the tempo of the match. With a high tempo match, you have little time to think and pass the ball accurately and thus easily make mistakes, whereas a low tempo match gives you more time to think on what to do before making a pass.”

Poulson said mental toughness is also part of football training in the present-day game. Players, he said, need to know how to assert themselves as players with a strong mental resolve, which can help them have complete control in complex situations and give them the ability to surprise themselves when the game demands.

Meanwhile, President of the SLFA, Lyndon Cooper said the course had reached its target, especially in relation to club licensing. Come December 31, the clubs that do not complete the application form and fail to meet the requirements for licensing are going to be a thing of the past as of January 1, 2017.

One of the prerequisites for the programme for the clubs is that they must have a certified coach.

Cooper added that he was satisfied with the five-day course under Poulson’s guidance.

He said: “The courses are not intended to be 36 hours or 100 hours pass-through; the coaches basically have to attend the various theoretical and practical sessions for a few hours and with the material given to them, they will then go on to expand on what they have being taught throughout,” Cooper explained.