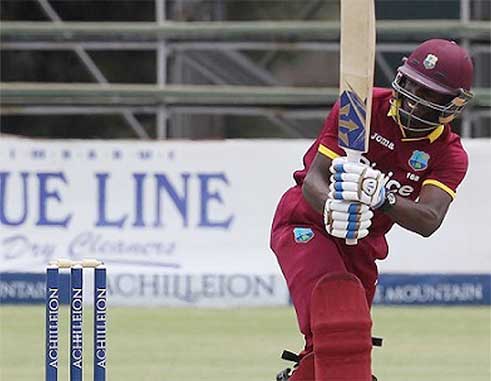 HARARE, Zimbabwe, Nov 16, CMC – West Indies recovered from a batting collapse to mount a clinical bowling effort, and beat Sri Lanka by 62 runs in their opening game of the Tri-Nations Series here Wednesday.

Sent in at the Harare Sports Club, West Indies were well poised at 172 for four in the 42nd over before losing their last six wickets for 55 runs, to be all out for a disappointing 227 off 49.2 overs.

In reply, Sri Lanka slumped to 16 for three in the sixth over, recovered to reach 139 for six in the 26th before crumbling to 165 all out off 43.1 overs – losing their last four wickets for 26 runs.

With the victory, West Indies moved to the top of the table on five points, ahead on net run rate of Sri Lanka also on five points, with Zimbabwe yet to register a point.

The Caribbean side’s start was less than impressive, however, as they lost both openers Johnson Charles (2) and Kraigg Brathwaite (14) cheaply to stumble to 27 for two in the tenth over.

Hope and Carter then featured in key partnerships which put the West Indies innings back on track. The right-handed Hope first added 49 for the third wicket with the left-handed Evin Lewis, whose 27 came from 50 balls and included a single four.

When Lewis was caught at the wicket off left-arm spinner SachithPathirana in the 24th over, Hope put on a further 53 for the fourth wicket with Carter, to take West Indies past triple figures.

Hope had just cleared the ropes at long on with slow medium AselaGunaratne and was eyeing a half-century when he was deceived and bowled four deliveries later by the same bowler, at 129 for four in the 35th over.

Carter and Powell kept the momentum going in a busy 43-run, fifth wicket stand off 41 deliveries, with Carter reaching his landmark in the 41st over with a couple to fine leg.

Man-of-the-Match Holder then struck early for West Indies, having Dhananjaya de Silva caught behind off an inside edge for three at seven for one in the fourth over.

Kusal Perera fell in the next over for four via the run out route with one run added, failing to beat Charles’s throw to the non-striker’s end from square leg, as he advanced down for a single.

When Holder induced a drive from KusalMendis and had the right-hander caught high at second slip by Nurse for four, Sri Lanka were declining quickly.