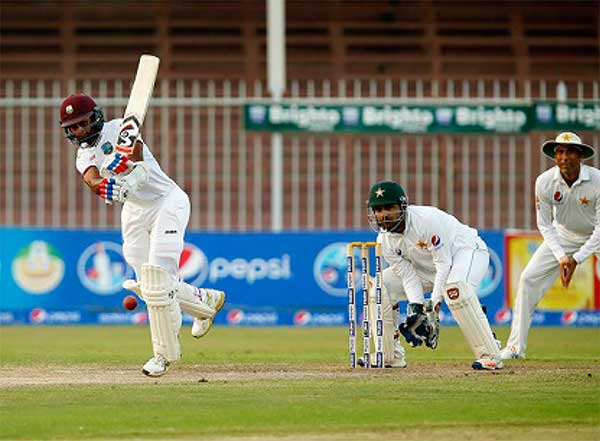 SHARJAH, United Arab Emirates, Nov 2, CMC – West Indies were on the verge of their first Test win in 19 months and the first on foreign soil in four years but a nervous final day lay ahead of the unpredictable Caribbean side in their quest to capture the third and final Test against Pakistan.

Set a modest 153 for victory on the penultimate day of the contest at the Sharjah Cricket Stadium here Wednesday, the Windies produced one of their now familiar implosions to slump to 67 for five on the stroke of the first hour after tea, before recovering to reach 114 for five at the close.

Once again, vice-captain Kraigg Brathwaite was at the heart of the West Indies’ enterprise, stroking an unbeaten 44 in an unbroken 47-run, sixth wicket stand with wicketkeeper/batsman Shane Dowrich who was not out on 36.

Brathwaite, who carried his bat in the first innings for 142, has so far faced 88 deliveries and counted four fours while Dowrich has consumed 61 balls and struck three fours and a six.

Together, the Barbadian duo propped up the innings which looked like coming apart at the seams when leg-spinner Yasir Shah ripped through the innings after tea, to finish with three for 30.

Left-arm seamer WahabRiaz also snapped up two quick wickets for 30 runs as West Indies stumbled, jeopardizing their pursuit of a first Test win since they beat England in Bridgetown last year May.

On a day when 11 wickets tumbled, captain and seamer Jason Holder captured his maiden five-wicket haul in Tests as Pakistan were dismissed for 208 in their second innings after resuming on 87 for four.

Opener Azhar Ali converted his overnight 45 into a top score of 91 while wicketkeeper/batsman Sarfraz Ahmed, unbeaten on 19 at the start, made 42.

The pair extended their fifth wicket stand to 86 before being separated as the hosts surrendered their last six wickets for 74 runs.

Holder claimed two of those wickets to end with superb figures of five for 30 while leg-spinner DevendraBishoo picked up three for 46.